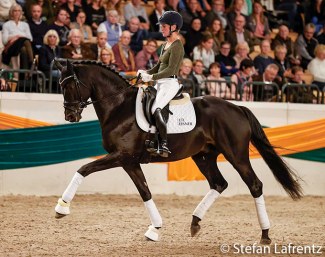 German Olympian Helen Langehanenberg announced on her social media that she has received the ride on the 5-year old Trakehner licensed stallion Kwahu.

Kwahu is a 2016 born stallion by Millennium out of Kalinowska (by Munchhausen x Sixtus). He is bred by Ines Eisold.

The dark bay sold as a foal at auction at the 2016 Trakehner Stallion Licensing for 80,000 euro. He was named Konstantin at the time and was an orphan foal. He sold to Polish born German dressage rider Anna Nolte of Hofgut Rosenau in Dreieich.

In 2018 the renamed colt Kwahu presented at the 2018 Trakehner Stallion Licensing, but dropped out after the phase on hard surface due to a hoof abscess. At that time he was listed as owned by Gestut Sprehe. They re-presented him at the Trakehner Late licensing in January 2019 and was named premium.

He did his 14-day stallion suitability test in Schlieckau in May 2019 and scored 7.7 for dressage and 7.55 for show jumping. At his sport test in Munster-Handorf in January 2021 he scored 7.57 points. He has not yet been competed in sport.

Kwahu sold again and is now owned by Wolfgang Diehm in partnership with Langehanenberg's long-time sponsor Margit Eisner. In 2020 Laura Strobel was riding the stallion.

Langehanenberg took over less than two weeks ago but already made her public appearance on him during the gala evening at the 2021 Trakehner Stallion Licensing in Neumunster.

"The impressive crowd during the gala evening didn't faze him at all," said Langehanenberg. "In fact, I had the feeling that he was enjoying all the eyes on him. Short interviews from the saddle, riding with a bouquet of flowers in his hand, waving to the audience - no problem at all with Kwahu. And he is only five years old. Amazing! He really is at peace with himself, is totally positive and has a lot of elasticity and basic swing."

Helen added that, "Kwahu owes his unusual name - I had to google this first - to a beautiful stretch of land in Ghana, Africa."