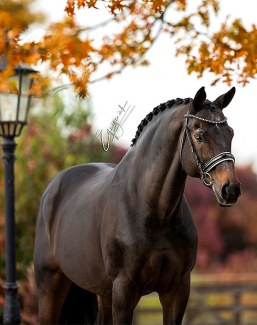 He received the title in honour to the achievements of his two offspring this year: Dalera BB won the Olympic and five gold medals this summer (two Olympic, three European) and son Hermes had his big international break through at the CDIO Aachen in September.

Born in The Netherlands

Easy Game is born in The Netherlands. He  is by Gribaldi out of the Danish bred Evita (by Schwadroneur x Cannon Row xx). He is bred by Flip and Jikkie Willemsen.

In 2001 his dam Evita, who was bred by Bjarne Noergaard in Denmark, had won the mare performance test in Denmark with 8.46 points and sold in the riding horse auction during the 2001 Trakehner Stallion Licensing as price highlight for 110,000 DM (55,000 euro).   She moved to the stables of the Willemsen couple in Bergharen, The Netherlands, in foal to Kaiser Wilhelm. After foal Evivva was born, they bred Evita to Gribaldi. Easy Game was born in 2003.

Dutch stallion keeper Joop van Uytert purchased Easy Game and presented him at the 2005 Trakehner Stallion Licensing in Neumunster. There he sold for 50% to Petra Wilm of Gestut Tasdorf.

From His First Crop: Dalera BB

Dalera BB was a foal from Easy Game's first crop born in 2006. His first year he stood up for stud at Gestut Tasdorf, where he covered Dark Magic (by Handryk x Hohenstein), owned by Silke Druckenmüller (née Fass).

Easy Game stayed at Tasdorf until 2010 and then moved to The Netherlands as a 7-year old, where he continued to stand until the end of 2014. For two years he was in Belgium and in 2017 returned back to Holland, where he has been since then.

Easy Game did not have a prominent sport career and was competed lightly but up to Prix St Georges level in Holland.  He was initially started at Tasdorf by Dieter Ingwersen, Mareike Peckolz and Hannes Lütt and then ridden by Jan Lens, Theo Hanzon, and John Tyssen. He was trained up to Grand Prix level.

In December 2014 the Belgian based Dutch veterinarian and rider Veronique Swagemakers and her partners acquired half ownership in the stallion from Van Uytert and Wilm. He stayed in Belgium for two years as a schoolmaster and was returned in 2017 to Van Uytert to resume breeding.

He was only bred to a very small amount of mares. He has 80 offspring registered as Trakehner and just 40 with the KWPN.

From his first year at stud in the Netherlands (in 2011), 32 offspring were born in 2012. Twelve of them are competing now and two at Grand Prix level: Hummer (by Easy Game x Jazz) with Nars Gottmer and Hermès with Dinja van Liere.

In 2014 Easy Game was proclaimed Trakehner Elite Stallion as he had sired licensed sons Sir Easy (out of a Tuareg dam) and the premium stallion and 2010 licensing reserve champion Millennium (out of a Ravel dam). The latter is now stamping all Trakehner breeding as he himself and his sons (Helium, Freiherr von Stein, Ivanhoe, Hopkins) are dominating the bloodlines. Since then Easy Game produced two more licensed sons, Honoré du Soir and Best Game.

In 2021 Easy Game was approved for breeding with KWPN and Hanover based on the success of his offspring.

The fact that Easy Game has produced two of the world leading dressage horses - Dalera BB and Hermes - out of such a small crop of offspring is special.

"I think it's because of the strong top line and connection that they make while moving and therefore excel in piaffe and passage," said Van Uytert.