Second Request for Pro Choice Top Hat Gets a No, Marshmallow Fluff to Be Banned, FEI Dressage Rule Revisions to be Voted On 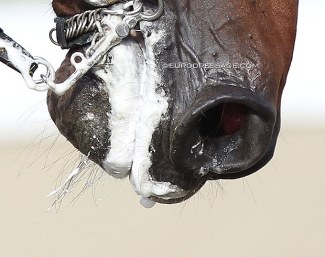 On 3 August 2021, British equestrian magazine Horse & Hound posted that a final push for a pro-choice top hat/helmet rule was thrown out by FEI.

The FEI issued a "rule revision" draft on 12 July 2021 in which this news became public. Many more interesting and sport developing revisions are on the table, including the banning of marshmallow fluff

National Federations and Stakeholders were given seven weeks until 30 August 2021 to review the first draft and the proposed amendments laid down in this first Draft and to make comments and/or propose any changes.

On 18 October 2021 the FEI will issue the final draft of the proposed rules changes to National Federations and Stakeholders.

In 2020 riders already tried to change the FEI mandatory helmet rule, which started on 1 January 2020, when several national federations as well as the IDRC submitted a petition, signed by 150 international dressage riders, in which they expressed the "pro choice" option for top hat or helmet wearing at 4 and 5* competitions as well as championships.

The FEI immediately responded that the top hat petition came "too late" as rule revision requests had to be done before the 1 March 2020 deadline.

This year the pro-choice rule revision was back on the table. “The traditional dress code with an elegant hat is a world-renowned recognition feature of dressage sport,” said a joint statement from the German and Austrian national federations, plus the International Dressage Riders Club (IDRC) and Association of International Dressage Event Organisers.

The European Equestrian Federation put forward a similar suggestion, adding that it proposes to “re-open the discussion”, as a survey among European national federations “has shown a preference for altered rules”.

According to Horse & Hound, "the topic has now arisen again, with several national federations and other corners of the sport calling for riders to have the choice of top hat or protective helmet ahead of the first draft of 2022 rule proposals. This garnered mixed reactions from the FEI dressage committee, ultimately receiving a hard no from the medical committee and the FEI board."

FEI Says No to Top Hats

Horse & Hound posted that the dressage committee supported the proposal, for riders with a minimum age of 26, “but not unanimously”.

The committee’s response said the idea was “not supported by the [FEI] medical committee” and the proposal was reviewed at the FEI board’s June meeting.

“The board unanimously agreed not to support the proposal and, therefore, it is not included in the proposed rule changes,” it stated. “The board noted that this topic was subject to a specific vote at the 2019 general assembly and that vote should be respected.”

On 12 July, the FEI posted the "proposed rule changes" that were discussed by the FEI Dressage Committee.


All final rule revisions will have to be approved at the FEI general assembly in Antwerp (BEL) in November.

A significant rule proposal put forward by the FEI is banning the use of marshmallow fluff to cover up contact issues. It has become more "en vogue" at international dressage competitions for some dressage riders to not only inject the sugary paste known as "marshmallow fluff",  into the horse's mouth, but also apply it to the lips to feign salivation.

6.4. Any decoration of the Horse is not allowed. It is not allowed to paint any part of the horse’s body, using coloured wound-spray and ointment if necessary is permitted. 6.5 It is strictly forbidden to use any type of white substance around the horse’s mouth to imitate foaming; this is considered cheating and against horse welfare as it can hide lip injuries. This will result in a warning or a yellow card.

The FEI dressage committee is putting forward another highly interesting rule revision “to ensure fair judging at all events, even when the JSP is not present.” It reads:

If a judge’s final score for a Horse/Athlete combination varies (above or below) by five (5)% or more from the average of the scores of the other judges for the same combination, that particular score will automatically be changed to be the same as the next closest score.

The International Dressage Trainers Club (IDTC) proposed the allowance of Body Bandages, citing that "many horses have sensitive skin, especially those recently clipped, and are susceptible to inadvertent spur marks. A body bandage protects against this injury."

The DC does not support this proposal and body bandages are considered as a gadget, and gadgets are not allowed in the current rules.