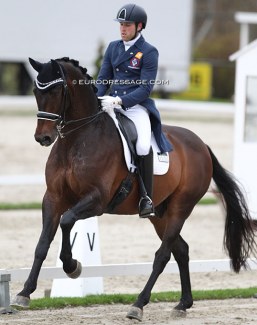 Aswin is a 16-year old Dutch warmblood gelding by Sandreo out of Ulinda (by Jazz x Chronos). He is bred by G. Gijsbers  and is a full brother to Fenna Roefs' small tour horse Brown Boy.

Luijmes began riding the bay gelding as a 5-year old in 2010 and trained him from L level to Grand Prix for owners Annette and Bert Bruil.

In their first year together they won bronze at the 2010 Dutch Young Horse Championships (KNHS-Subli Championships).

The pair made its international Grand Prix debut in 2015 at the CDI Arnhem starting with a 62.580% in the Grand Prix. Over the course of the next five years they competed at CDI's in Roosendaal, Hickstead, Oldenburg, Lier, Dortmund, Nieuw en St. Joosland, Aachen, Wiesbaden, Frankfurt, and Ermelo. They competed at the 2016 and 2017 Dutch Grand Prix Championships and were 10th in 2017.

Their last international start was the 2020 CDI Dortmund right before the corona pandemic. Their Grand Prix career high score was 70.160% achieved at the 2017 CDI Hickstead. There they also placed second in the Kur to Music with 73.040%.

At the beginning of 2021 the gelding injured himself, recovered and then re-injured himself, needing at least five months to recover from that. In agreement with the owners, it has been decided to retire Aswin from sport with the horse turning 17 in 2022.

"Aswin was a super fantastic horse which allowed me to experience many beautiful things," Luijmes stated. "I want to thank the owners for allowing me to ride him all this time and for believing in me and Aswin. He will now get to enjoy his retirement. After an injury we no longer want to strain him with heavy work. He always gae his all and I'm very grateful."

Owner Annette Bruil added, "unfortunately we had to decide this too early because we wanted to enjoy them as a combination for a few more years, but considering their great performances, Aswin deserves this retirement fully."

In an interview with De Hoefslag, Luijmes added that "Aswin was my advertisement horse. We showed everyone how far you can get with do-it-yourself supplies."