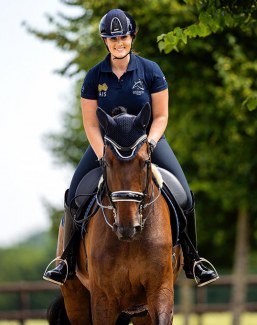 Australia’s Para-equestrian Team for Tokyo 2020 will be headlined by the nation’s first equestrian athlete to compete at three Paralympic Games.

Sharon Jarvis, who rode at Beijing 2008 and Rio 2016 and hails from iconic West Australian town Donnybrook, was among four riders confirmed as members of the Australian Paralympic Team by Paralympics Australia on Saturday.

Jarvis will be joined in Tokyo by Rio 2016 representative Emma Booth, Germany-based Amelia White, as well as Victoria Davies, who was forced to withdraw from qualifying for Rio due to illness. White and Davies will compete at their first Games.

“The past 18 months has brought out the very best in our Australian Para-athletes, including our four world-class Para-equestrian representatives, who’ve remained steadfast in their pursuit of a place on the Team for Tokyo,” Paralympics Australia Chief Executive Lynne Anderson said.

“This is a moment they’ve worked extremely hard to earn and deserve to savour. Congratulations to Sharon, Emma, Vic and Amelia and congratulations also to everyone at Equestrian Australia who’s given their all to ensure we’ll field a strong and well prepared Team in Tokyo.”

Equestrian Australia Chief Executive Darren Gocher said: “Congratulations to all combinations selected to represent Australia at the Tokyo 2020 Paralympic Games next month. Our Para-equestrian athletes are no strangers to overcoming adversity and throughout the global pandemic they have not lost sight of their Paralympic dreams.

“The history-making efforts by Sharon Jarvis, who with her Tokyo selection becomes the first Australian equestrian Paralympian to compete at three Games, is testament to Sharon’s commitment to Paralympic success. Tokyo 2020 also marks the second Paralympic Games for combination Emma Booth and Mogelvangs Zidane, which is again an Australian first.

“Para-equestrian is truly a team sport and Equestrian Australia would like to acknowledge the horse owners and grooms, whose teamwork allows our athletes to realise their goals. We wish all our Para-equestrian athletes a safe and successful Games and we look forward to watching them shine in the Tokyo dressage arena."

Australia has won nine medals in Para-equestrian since first competing in the sport at the Atlanta Games in 1996. The most recent of our three gold medals was won by Joann Formosa, who triumphed in the Individual championship test grade lb at London in 2012.

“The four athletes we’ve announced today have shown they have the essential attributes to succeed at the highest level and I have the utmost confidence they’ll make us proud when they compete at Equestrian Park throughout the first week of the Games in Tokyo.”