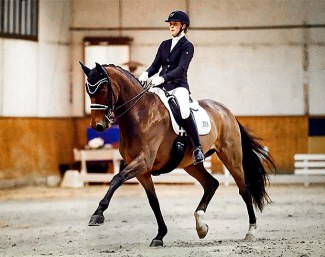 The German equestrian federation has announced the combinations that qualified to compete in the 2021 Piaff Forderpreis, the national show circuit for German Under 25 riders.

The combinations for each annual Piaff Forderpreis are decided at a special training and selection seminar at the DOKR headquarters in Warendorf, which was held on 17 - 18 February 2021.

This year a total of 33 pairs came to Warendorf and not some U25 routiniers, but a brand new combination from the north of Germany shone the brightest at the selection trial.

The invited combinations had to compete in the short Grand Prix test and were assessed by judges Katrina wuest, Elke Ebert and Ulrike Nivelle. Afterwards each ride was commented on by German team trainer Monica Theodorescu, so that the riders returned home with feedback and tips for practice.

The winner of the practice test in Warendorf was the new duo Aline Schrader on the 12-year old Paola (by Lord Loxley x Friedensfurst). The combination came out of nowhere and presented her mare beautifully, showing the best piaffe-passage tour of the day. They are trained by Hartwig Burfeind and scored a winning 73.062%.

German youth team routinier Semmieke Rothenberger is in her second year at Grand Prix level and finished second on the Grand Prix horse Flanell, an 11-year old Dutch warmblood mare (by Apache x Don Schufro) which they bought in May 2020 from Veronique Roerink. They scored 71.822%. Aboard her second horse and former German YR team ride Dissertation (by Don Crusador) she scored 69.535%. The black mare still had some issues with the piaffe.

The top five was completed by a southern newcomer Susanna Schmaus aboard a seasoned competitor, Heartbreaker. The grey gelding was previously trained and competed by Mandy Zimmer, Terhi Stegars and Emma Kanerva and sold to Schmaus in March 2020. The U25 duo trains with Franz Trischberger.

There were several combinations at the selection trial who might not have scored at full potential yet, but who are ones to watch. Henriette Hachmeister did well on Susan Pape's Grafit (by Grafenstolz x Ganymed), Maike Mende and First Class (by Furstenball x Bergamon) showed promise but made too many mistakes and Sophie Stilgenbauer presented an interesting grey gelding, Baptiste (by Benetton Dream). The 23-year old trains with German based Ukrainian Anatoly Bocharov.

The pairs competing at the selection trial scored the following marks:

Automatically nominated are the combinations who are already member of the German Under 25 squad. They are: