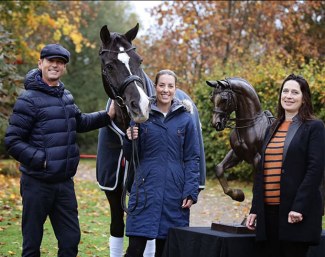 Dressage legend Valegro had a special trip out today to meet…himself! The triple Olympic medallist made the short journey to the International Centre for Birds of Prey in Newent to be the guest of honour at the COVID-secure unveiling of his statue which will take pride of place in the town centre in due course.

‘Blueberry’ was joined by Carl Hester, Charlotte Dujardin and Alan Davies and a host of local media and he certainly looked to approve of the attention, and his incredible likeness, sculpted by local Georgie Welch, who was also there.

Following a gold post box in Newent to recognise Charlotte and Valegro’s London 2012 achievements, momentum for a further tribute grew and the striking statue is the culmination of plenty of hard work from the volunteer Newent Initiative Trust working with the local council. The statue was funded by selling 11 of 12 bronze maquettes which are an exact replica, one even has a home in Australia. The first one was snapped up by Anne Barrott, one of his owners, who was also on hand today as part of the launch.The final one was donated by Georgie to a raffle which raised further funds towards the project.

The half-life sized statue will move to its permanent home by the Market House in the centre of Newent in November and proudly watch over the town where it’s hoped many will come to visit their equine hero.

A delighted Carl commented; “I’d like to thank the team at the Newent Initiative Trust for getting this off the ground so that we can actually have a statue of Valegro in the town. After the Olympics in 2012 Charlotte got a gold post box in the town and all these years later, to follow it up with this statue of Valegro is so exciting – not just for fans of him but for our local area. I hope it will bring people into the town to see Valegro.

“He’s still as star. Many might imagine a gold medallist to be a fiery, wild beast that needed taming but Valegro is far from it. We have sick and terminally ill children come to the yard and they can ride him, he brings so much pleasure to them. He’s regularly ridden by another Olympian that lives in Newent, Trish Gardner, who’s in her 80s and he takes her round the country lanes, eating the hedge as he goes and they have a fabulous time together twice a week.

“Thanks to Georgie for capturing him brilliantly. He’s captured in a dressage movement called piaffe which is the most difficult thing you can do in the sport of dressage. This is probably what Valegro is most famous for and regularly scored perfect tens. It’s a classic picture - it’s a ten statue of a ten horse!

“The equestrian community have contributed to this so thank you. Not only through buying replica statues but £1 raffle tickets and we were overwhelmed so many contributed to it as they wanted to see the statue in place. I hope everyone can come and visit it once it’s placed in Newent.”