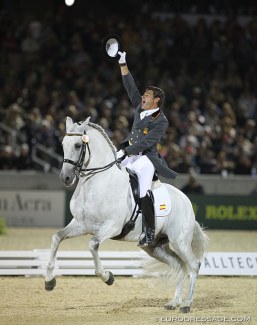 September 30, 2020 was the 10th anniversary of Juan Manuel Muñoz' famous Freestyle with Fuego de Cárdenas at the 2010 World Equestrian Games.

A magical night to remember that established a new era in the history of Spanish Dressage. This Freestyle became an impressive collective celebration in which Spanish art appeared in its whole dimension. The bleachers at Kentucky Horse Park Stadium rumbled and to this date, Fuego's 2010 WEG freestyle is remembered as one of the greatest in dressage history.

Juan Manuel Muñoz  was aware of his partner Fuego de Cárdenas' great shape and form. Prior to the intercontinental appointment, the European pre-season was a preview of what was coming. At the CDI 4* in Cappeln, the pair placed second  in the Grand Prix (75,574%), ahead of medalist Isabell Werth with Satchmo.

From there, Juan Manuel Muñoz realized that everything was possible:

"The season in Germany was incredibly good. I remember the last show in Germany that I beat Isabell Werth with Satchmo. It lifted me up and gave me the security to think it's possible," said Juan Manuel

Once in Kentucky, the goal was clear; qualify for the Freestyle. In both the Grand Prix and the Special the results were very competitive, with them scoring 74,957% (fifth place) and 76,042% (fourth position).

Juan Manuel Muñoz recalls this championship with great emotion and his voice breaks when he reminisces on the moments experienced.

"The first thing I think about remembering Kentucky 2010 is emotion. I get goosebumps when I remember everything," he said. "At that time the horse was very good and the goal was to qualify for the Kur. In the Grand Prix he was fantastic. From there, we got better and the next day, Fuego placed  fourth position in the Special: it was un-be-lievable."

After the great results in the first two rounds, the work was already done: the Freestyle was the test for enjoyment and delight.

"I remember that night I got up at 4:00 am and thought, “tomorrow I will bust this”, I was so convinced! For (team trainer) Jan Bemelmans, the most important thing was the Grand Prix and the Special. When we got to the warm-up for the Kur, Jan told me that I had carte blanche and to take care of it by myself."

In an electric atmosphere, a sepulchral silence settled in and the multitude of people who came to watch the musical tests, were on the edge of their seats.  Juan Manuel Muñoz took to the centerline with the impressive Fuego de Cárdenas, as the final representative of the Spanish delegation.

To the chords of his very Spanish music, specifically flamenco style, the pair danced to the rhythm of the snapping castanets and Spanish guitars (music composed by Michael Erdmann). Every lover of equestrian ballet has viewed this test an infinite number of times. Every stride of Fuego de Cárdenas lifted up the Kentucky audience, which did not hold back their excitement with cheers and clapping.

The first diagonal for the extended trot was a total delirium, Munoz recalled.

The compendium of Spanish music continued to resonate in the Kentucky Horse Park, and no one could stop watching. The entire piaffe-passage tour was exquisite, but the great finale of the night, and even of the competition, the great highlight as the Americans would say, was when Juan Manuel Muñoz took to the centerline in canter, performing one- time changes with only one hand on the reins. That exercise delighted the spectators so much that applause, shouts and ovations sprung from the bleachers.

Juan Manuel Muñoz defines this centerline as his favorite part of the test. He felt that fervour and support from the public.

"I was aware of that electric environment," said Juan. "People were really engaged, and when I raised my hand, they went on fire. Fuego gave me a lot of security and showed off 100%.”

Along the same lines, as grand finale, Muñoz did an extended canter, followed by a pirouette in piaffe, a typical Spanish exercise,  which caused the public to explode with delight, in a memorable cacophony of shouts and applause.

Juan Manuel Muñoz, riding Fuego de Cárdenas, was at the top of his game, captivating the hearts of the 25,000 people congregated there, converting themselves into the favorites of the night. They scored an impressive 81.450% and placed fifth.

For Muñoz, the last centerline was the culmination of a great job: "When I saluted, I thought I succeeded, not every day you get a test like this"

"I still get goosebumps when I remember the Kentucky Freestyle"

On the night of 30 September 2010, Juan Manuel Muñoz and Fuego evoked emotions, captivated the crowds, and gave goosebumps to all. The rider based in Ecija, Spain, defines this freestyle as the greatest test of his career.

"For me it's the test of my professional career. I remember Jordi Domingo told me that I made the best Grand Prix of my career, but that the Special was even better. But in general, the Freestyle is always the public's favourite test," said the Spaniard. "Overall, it was not only this test, but the whole championship itself. I went for more and more; in few words it was an absolute success."

Since then,  every lover of equestrian ballet has seen that test countless times on YouTube. Juan Manuel Muñoz tries not to see it much, as he says with tears in his eyes, he gets very emotional. There are many words that can describe that magical moment, but for Juan Manuel Muñoz there is not one in particular. For him, it meant the happiness of a very long job and journey. A perfect equation of teamwork with a great result. All the people involved from the owner, vet, teammates, physios made it possible.

Muñoz and  Fuego de Cárdenas placed Spanish Dressage at the highest level in its history, so far. It brought Spanish Dressage to unimaginable heights in a niche sport that does not reach the great masses. The Spanish Pure Bred Horse captivated the heart of the whole world.

This Freestyle is today an international benchmark, it has crossed borders, and has become a viral phenomenon every time it is shared on social networks.  10 years of that magical moment that reminds you that nothing is impossible.

"Dressage is dancing with your best friend," said Estefania Lopez Gil. "A friend who not only accompanies you but teaches you and wants to make your dreams possible. Now, it is also true that the harmony of a friendship comes in hand with the will, commitment, and desire to achieve it. And thus, achieve now, not your personal dream, but of the whole combination."