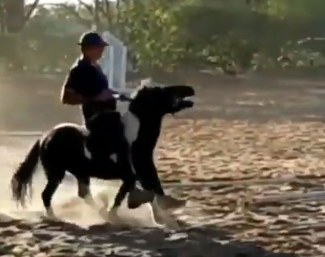 The Superior Court of Sports Justice (STJD) of the Brazilian equestrian federation has pulled a Pontius Pilate move and said it is "incompetent" to rule in the animal abuse case of Brazilian Olympian Leandro Aparecido da Silva.

On 17 September the sport tribunal called itself incompetent to impose sanctions on a rider for abuse that  did not happen at a CHB sanctioned competition.

It took the tribunal almost three months to come to this conclusion of ineptitude.

On Sunday 12 July 2020, a video was posted on social media, showing the 44-year old Leandro Aparecido da Silva aboard a small pony and severely yanking it in its mouth with the reins, while a by-stander (identified as his son) is laughing.

A second video shows Leandro's 20-year old son jumping the same small pony and crashing into an obstacle. This reckless behaviour led to the pony making a highly dangerous rotational fall and landing on its back! An unidentified by-stander is laughing at the situation.

The 7-year old pony Lollipop, who arrived in Leandro's stable in Boituva, near Sao Paulo, as a stallion, was bought for Leandro's 7 and 2-year old daughter.  In an interview with the Brazilian equestrian magazine HORSE, Leandro explained his actions as "a conscious correction" of the pony because it had bitten his daughter.

The publication of the videos prompted a massive outcry from Brazilian horse lovers, who called out this blatant animal abuse and demanded justice. As an Olympic athlete, Da Silva is supposed to be a role model for the sport.

On 14 July 2020, the Brazilian equestrian federation responded with an official statement, without mentioning the name of the rider, that they "reject any acts of mistreatment and abuse attitudes that endanger the physical or emotional integrity of any animal."

As the rider admitted to his actions, the Superior Court of Sports Justice (STJD) of the Brazilian equestrian federation did investigation and held a hearing. The FEI was notified of the abuse and it responded that it would adopt the sanctions from the STJD. However, if the FEI deems them insufficient, they will take action themselves, or refer the case to the ECIU.

Brazilian law categorizes animal abuse as an "environmental crime". Article 32 of the Environmental Crimes Law prohibits the "abuse, mistreatment, or mutilation of domestic or wild animals, including exotic animals, as well as domesticated fauna, which are wild creatures previously captured and tamed". The penalty applied for this crime ranges from "3 months to one year of imprisonment and fines". Another Brazilian law stipulate that an abused, domesticated animal will be taken away from its owner.

On 17 September 2020 the Superior Court of Sports Justice (STJD) of the Brazilian equestrian federation announced that it will not rule in this case of animal abuse.

Silva infracted Article 191, III, of the Brazilian Code of Sports Justice (“CBJD”), Article 137 of the Equestrian rules, as well as the FEI Code of Conduct  (Annex I of the Veterinary Regulation) and FEI Article 142 for alleged acts of cruelty and mistreatment of the Pony Lollipop.

It was Silva's lawyer, who argued that the Tribunal can not impose sanctions over matters that do not take place at CHB sanctioned events. The tribunal followed that argument.

Tribunal member Bianca Telles Menchise stated: "I accept the preliminary of incompetence of this court, accused by the defence, considering that the alleged disciplinary infraction was not committed during a competition, being, therefore, the Superior Court of Sports of Brazilian Equestrianism incompetent to judge the case on screen, based on art. 24 of the CBJD.

The only official measure that has been taken so far is that the work licence for Leandro Aparecido da Silva and his son at the renowned Sociedade Hipica Paulista in Sao Paulo (the only venue in Brazil to regularly host CDI competitions) has been revoked.

Both Leandro and his son are regulars at he riding club, from where they train, teach and work. The Sociedade Hipica Paulista is led by Romeu Ferreira Leite Jr.

The São Paulo Equestrian Federation (FPH), led by Gabriel Khoury, issued a note stating that it repudiates any acts of mistreatment and abusive attitudes that endanger the physical or emotional integrity of any animal. However, they did not impose any sanctions on Silva.

The FEI has not yet replied if it will adopt its own sanctions against this international dressage rider, who has admitted to repetitive abuse of his pony, or refer the case to the ECIU.

Meanwhile, billionaire Barbara Laffranchi is running for the presidency of the Brazilian Equestrian Federation. If elected, Barbara will be the first woman to chair CBH. She has been Brazilian team trainer of the Rhythmic Gymnastics team from 1990 till 2004.

Laffranchi has strong ties to the Brazilian dressage world. She owns Biso das Lezirias whom she gave to Olympian Joao Marcari Olivia as ride for the 2019 Pan American Games.

In an interview with UOL.com.br, Laffranchi stated that, "I know Leandro is not an abuser, he is not a guy who mistreats (animals). He had an unhappy moment."

In order to strengthen the vote for her candidacy, Laffranchi is boasting to have secure huge cash sponsor contract with an unidentified bank, which will only stand if she gets elected. The election date has not been announced yet, but is expected to be on 21 November.