Söder and Schrödter Withdrawn from German Young Riders Team, Only Schmidt Steps In 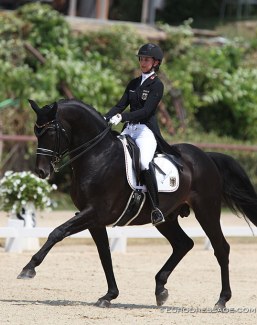 Right on the brink of traveling to the 2020 European Young Riders Championships, the German team suffered a big blow with no less than two horses dropping out and only one of two reserves able to take up the freed slots!

Both Selina Söder and Jana Schrödter have withdrawn from competing in Budapest next week and only first reserve Henriette Schmidt is substituting.

The German team will compete in "diet" version at the 2020 European Young Riders Championships in Pilisjaszfalu, Hungary on 17 - 21 August 2020.

Both Selena Söder's Rendezvous (by Riccione) and Jana Schrödter's Frau Holle (by Furstenball) are not fit to compete.

The German selectors had named Henriette Schmidt (Rock's Sunshine) and Linda Erbe (Fire Moon P) as first and second reserve. The 18-year old Schmidt and her 13-year old Rocky's Sunshine (by Rock Forever) will cover one place. The combination was member of last year's German junior team in San Giovanni.

Second reserve Linda Erbe could not step in either and sees the dream of going to Budapest go up in smoke.

"Sadly she did not feel to 100% good in the training this week," Linda told Eurodressage about her First Final mare Fire Moon P. "That’s why we decided that it would be better to leave her at home." Linda's twin sister Helen Erbe was also a strong team contender for Germany but at the last selection trial had to withdrawn as her horse Furst Kasper developed a mild colic, from which he recovered quickly. "This year seems bewitched," Linda added.