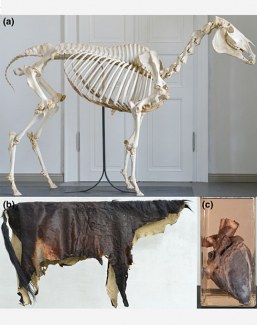 The Thoroughbred Dark Ronald xx is not the source horse of the Warmblood Fragile Foal Syndrome (WFFS). A recent study proved that Dark Ronald xx was not a carrier of the WFFS causative variant and that the origin might come through Thoroughbred use in the Hanoverian F/W line.

The potential origin of WFFS has been assumed to trace back to the English Thoroughbred stallion Dark Ronald (1905–1928). However, whether Dark Ronald, his father Bay Ronald or even an Arabian horse several hundred years earlier were actually the founders of the disorder remained elusive.

In 2019 the disease became known to the mass public and caused an uproar in the breeding world as it explained the reason for miscarriages and infertility between WFFS positive mares and stallions.

In March 2019 the Westfalian society released a statement in which the Thoroughbred Dark Ronald xx was put forward as a potential "patient zero" for genetic disease. Through his son Bay Ronald xx and the tremendously popular Furioso II, WFFS might have spread amongst modern horse breeding.

Based on pedigree data from 2000 WFFS tested horses the putative origin of the causative variant was traced back to Dark Ronald XX or his father Bay Ronald XX.

At that time Eurodressage interviewed Nena Winand, one of the U.S.A's leading researchers on WFFS, who stressed that the origin of the mutation does not lie in Bay Ronald xx, but can be traced back even further several hundred years.

"Dark Ronald and/or Son of Law may have been carriers, but were not the source of the trait," Wenand told Eurodressage. "Historic documentation shows that carriers were bred in the early 1800s."

Who is Dark Ronald xx?

Dark Ronald xx was a Thoroughbred stallion and started an early racing career in his home country then was sold into Germany in 1913.

In 1928, suffering from colic, the horse was transported to the veterinary clinic of Halle University. After death, its remains (dehydrated and preserved skin, formalin‐fixed heart and skeleton) were preserved and today are still on display in the Museum of Domesticated Animals of the Central Natural Science Collections of Martin‐Luther‐University Halle‐Wittenberg

In a recent report DNA extracted from a tooth sample from Dark Ronald has been used in a phylogenetic study. For DNA extraction 2 cm2 skin samples were used.

Dr. Betram Brenig, professor at the Institute of Veterinary Medicine at Göttingen University, confirmed to Eurodressage that Dark Ronald xx was not a WFFS carrier!

"The available NGS data of Dark Ronald did not harbor the PLOD1 gene region on chromosome 2," Dr. Brenig told Eurodressage. "Therefore, we isolated DNA from the relicts and determined the genotype using PCR. From our analysis we have no indication that Dark Ronald was carrier of the WFFS causative variant."

Brenig added that "in biological sciences you are always careful with wording because in biology nothing is really 100%. In a legal assessment the wording would be "with a probability bordering on certainty“, which corresponds to around 98.5-100%."

Brenig continues, "our findings are supported by a recent article showing that the WFFS‐causing variant most likely originates from a Hanoverian stallion born in 1861."

On 22 April 2020, Dr. Julia Metzger published her study in which she reveals that the Hanoverian F/W-line has contributed to the segregation of Warmblood Fragile Foal Syndrome.  Metzger stated that, "further pathway analysis revealed a stallion from the Hanoverian sire F/W line as the most common recent ancestor of all tested genetic carriers." The name of this Hanoverian in her paper is not revealed.

Wenand explained that "the 1861 stallion is not the source of the mutation, but that it was the closest common ancestor that may have accounted for the presence of the mutation in the horses they tested. (Metzger) further pointed out that the mutation most likely entered the warmblood registries from one or more Thoroughbreds used early on."

Wenand is also critical of the previous analysis that was made and that wrongly pointed at Dark Ronald xx as the source. "At least it is now proven that Dark Ronald and Son of Law were not the source of the mutation, which was proposed by German statisticians, who used a flawed analysis that didn't account for transmission via dams. That is a big issue with these types of computer analysis."