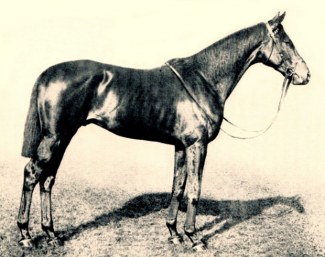 The Westfalian Society announced today that the origin of Warmblood Fragile Foal Syndrome (WFFS) has been identified. The syndrome has been traced back to the English thoroughbreds Dark Ronald xx and his sire Bay Ronald xx.

Based on the data provided by the Westfalian, Oldenburg and Trakehner breed society from 2000 WFFS tested horses, the VIT bureau analyzed that the 1893 born TB Bay Ronald xx and his 1905 born son Dark Ronald xx were the only ones that reappeared in the pedigree of the WFSS carrier horses. No less than 15,000 horses were inspected in the pedigrees and those two TB's popped up in the carrier horses each time.

According to the report presented to the Westfalian studbook, the mutation has happened in these two stallions or maybe even earlier in their lines. Because these stallions were very popular with breeders their line appears in many WFFS negative as well as WFFS carrier offspring.

The entry of the mutation in the riding horse population took place via the sons of Dark Ronald xx, mainly Herold xx (1917) and Son-in-Law xx (1911).

This also means that the Furioso xx line is partly responsible from bringing WFFS into the bloodlines of modern day sport horse breeding. Also Ladykiller xx, who influenced modern show jumping breeding, has Bay Ronald xx both in his sire and dam line. They were two of several TBs used for modern sport horse breeding.

Nena Winand, one of the U.S.A's leading researchers on WFFS, adds several critical footnotes to the Westfalian studbook's statement: She stresses that the origin of the mutation does not lie in Bay Ronald xx but can be traced back even further several hundred years.

"The analysis of the origin of the WFFS1 mutation provided by VIT and made public by The Wesphalian Society today is misguided," said Winand. "The mutation was introduced into the Warmblood and Thoroughbred populations separately by the use of desert-bred Arabians that were carriers of the defect in the initial establishment of the Thoroughbred breed and by subsequent use of both Thoroughbreds and desert-bred Arabians in the various Warmblood populations."

"Dark Ronald and/or Son of Law may have been carriers, but were not the source of the trait," Wenand told Eurodressage. "Historic documentation shows that carriers were bred in the early 1800s. It is not possible to analyze Warmblood pedigrees no matter how large the sample and conclude a mutation source because multiple Arabians and Thoroughbreds, all at risk to be carriers of WFFS, were used to develop today's horses. The same is true of Thoroughbreds which were developed largely from multiple Arabians. One can see this if one looks at the foundation pedigrees, particularly of the Thoroughbred. It is also known that the foundation pedigrees are not completely accurate."

"Because of the age of the mutation and the fact that any Arabian or Thoroughbred used in a Warmblood breeding program going back to minimally the Godolphin Arabian (1724) but likely much earlier," Winand added. "If you see how many Arabians and "Turks" were used in the foundation breeding of the Thoroughbred. It may have existed in the 1600's."

"You may want to qualify that the evidence that the trait derived from Arabians comes from historic breeding records from the 1800's," Nena stated. "While we can't ironclad guarantee that they are correct, the description of the affected foals and abortions/stillbirths is precise and the particular bloodline was certainly used in the various registries. There is a large-scale survey being done on Eastern European Arabians now which will tell us more. However, it is important to note that unless this trait were selected for over time it may even be bred out of a population. In Warmbloods and Thoroughbreds the trait has been selected for in recent decades."