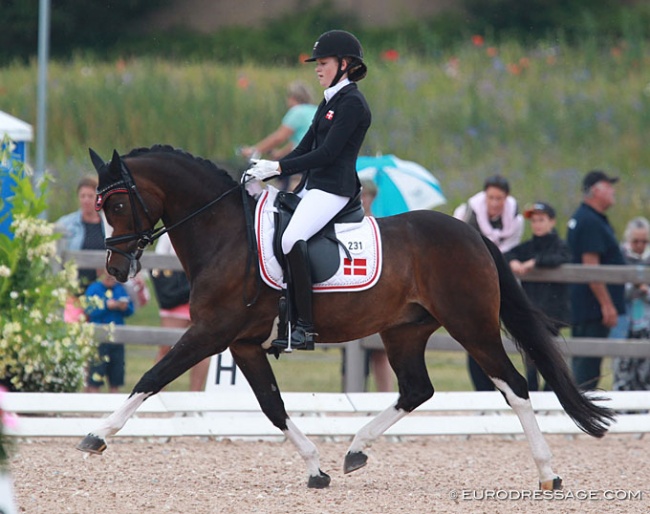 Farbenfroh is a 17-year old German Riding  Pony by Farewel I out of Alja Cream Dipped (by Rakt's Rocky).

He is bred by Caroline Albrecht and owned by Annabella Pidgley

Farbenfroh is a Holsteiner bred German Riding pony and was licensed at the age of 3 at the 2006 Holsteiner Stallion Licensing.

Farbenfroh made his show debut in Denmark at the age of 5 under Anna Nørremark, who competed him from 2008 until February 2010.

In the spring of 2010 Danish Christina Kjeldstrom took over and showed him at national level through 2012.

The talented Farbenfroh sold to Sara van Deurs Petersen and made her competition debut in Denmark in March 2013. They won bronze at the 2013 Danish Pony Championships.

Coached by Cathrine Dufour, Sara and Farbenfroh became one of Denmark's highest scoring pairs. In 2014 they made their CDI debut in Stadl Paura, Austria, and went on to Kapellen and Hagen to get selected on the Danish team for the 2014 European Pony Championships in Millstreet, Ireland. There they finished fourth with the team and 11th and 12th individually. They got silver at the Danish Championships that year.

In 2015 they only did two internationals, Nieuw en St. Joosland and Hagen, and returned to the 2015 European Pony Championships in Malmo, Sweden, where they won team and Kur bronze. They finished their year with gold at the Danish Pony Championships.

After the Danish Nationals in 2015, Farbenfroh sold as a schoolmaster and second iron in the fire for rising British pony rider Annabella Pidgley.

The new pair began showing at national level in Great Britain in 2016 and they made their international CDI debut in the summer of 2017 at the CDI Hickstead, where they won all three pony classes. In September 2017 the pair became Medium Silver Champion at the British Nationals. In October 2017 they went to Le Mans and were in the top three three times.

Pidgley rode just three internationals on Farbenfroh as her other pony Cognac IX became the number one in the barn and her British team ride. Pidgley and Farbenfroh's third and last CDI was the CDI Nieuw en St. Joosland in April 2018, where they were 10th and 12th in the team and individual test.

Annabella and Farbenfroh rode their last competition at the Premier League in Somerford in 2019.

"As he is 17 this year we decided to retire him here at my home in Windsor and he is now living a happy retired life with us," Annabella told Eurodressage. "He's the coolest."

Through the acquisition of Farbenfroh, Pidgley came in contact with Cathrine Dufour. She has been training with the Danish Grand Prix rider since then.