Jen Vanover: "Semen Fraud, the Rest of the Story" 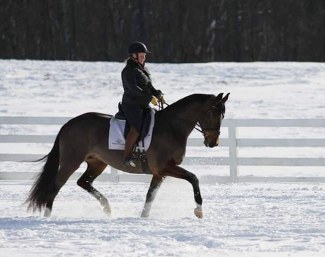 Jen Vanover is owner and manager of  Maplewood Warmbloods in the U.S.A. She is a breeder and owner of Oldenburg dressage horses and stallions and has hosted symposiums and clinics, as well as two prestigious USDF/USEF recognized breed and dressage competitions at her yard.

Here is her reaction to Stallion Owners Demand WBFSH to Take Action Against Sperm Fraud, to which Scot Tolman responded with "Hold European Stallion Owners Accountable for the Quality of Product They Export"

Semen Fraud, the Rest of the Story

I certainly echo Scot Tolman’s rebuttal posted earlier. I have to say the original article regarding semen fraud hit a nerve. Both as a multiple stallion owner and as a mare owner/breeder.

As a stallion owner in the US what we must do to get breedings is ridiculous. We do not have semen brokers who market our boys for us and it is not that mare owners go online, click and buy, and I am sent money for the stud fee. No. We spend hours answering emails, phone calls, videos and photos, regularly. In addition, we have to offer 1-2 year live foal guarantees. With all that we are lucky to get 10 breedings in a breeding season.

Mare owners can breed to the next hot thing in Europe by utilizing frozen semen without any real hassle or responsibility by the stallion station. As a mare owner, I also have that choice and do it often. I started with frozen breeding. It was convenient to have the semen there and waiting. Back then the quality and quantity was there for most of the stallions I chose, so that if my mare was clean and the timing right, I would get a pregnancy. This is not at all the case anymore.

Now I read an article about stallion owners worried they are not making the money they think they should. Here is the thing: selling semen is different than selling breedings. The real “sperm fraud” is on the doses of junk mare owners spend hard earned money on that are useless. I have been breeding for 14 years and doing my own breeding for 7 years. I have seen a huge change in the last 7 years on the quality of the semen and the quantity received. I get reports which say post-thaw is magically always 45 or 55% PTM and then it goes under the scope of the end user and it is maybe 5% and that’s with a generous eye. Friends with CASA machines report 7-9% oftentimes.

Furthermore there is the blatant carelessness having received multiple doses with straws that had nothing, but extender in them. No sperm at all! I have had many straws explode into the water never having the chance to try on my mares. I have received doses where the concentration was so low that it looked extended 1:10. I have received doses that have given the mare such an infection that she could not be bred the rest of that season, yet with a known “good” breeding stallion she is in foal, first try the following. I have seen breeding doses go from 5-8 straws down to 2-3 straws provided of the same stallion. The price changed not by going down by 50% but up by 100%.

So, are mare owners to get refunded when they buy something that does not work? When they get garbage? If a reliable and consistent product is not sold, protections should not be provided. So now stallion owners are not just getting 15 doses of frozen per collection they are getting 30 and selling them for twice as much as they used to for the same stallion. So, they are now making 200% more. Now it seems not enough if they miss a stud fee on just 1 foal from a mare owners’ risk and luck.

The Risk of ET and ICSI

Yes, these are the days of ETs and ICSI. Yes, mare owners have gotten lucky on a rare occasion to split a dose and get 2 foals. Stallion owners seem to only view this through tunnel vision, seeing mare owners taking advantage and getting rich of the technology to make all these babies without paying the stallion owner more. Reality however is much different. Roughly 60-70% chance of an ET going flawless from start to finish. It is a procedure done only on special mares as an owner would not go to the expense on anything less. Wouldn’t you want your stallion to have those mares? If they get 2, good for them. They made a big investment and took a big risk. With frozen even more risk and again. With fresh semen, maybe half a stud fee more is fair for stallion owner, but to think you are owed a full breeding more when you did nothing more and provided nothing more is in my opinion unreasonable.

ICSI? In the US expect to spend $10,000 per time. Often 20+ eggs are pulled. Maybe 9-10 are fertilized and it maybe results in 1 foal on the ground 50% of the time. These are quite common results here. I’m not seeing the big victory and payoff for the mare owners. Every time I hear this comment of mare owners taking advantage, I look at the mountain of frozen semen straws I have in my lab and cry a little at the Porsche I could have had. I know that I do not have anywhere near that many foals from it. Stallion owners raking in hundreds of thousands a season when mare owners hope to sell 1 foal for $15,000 after waiting 11 months. In Europe, maybe they get lucky in an auction for a higher price, but that is not an option for most frozen semen buyers.

Rest assured that mare owners talk; not just within the US, but abroad in all countries via social media. We all know which stallion stations consistently provide good semen that resembles the paperwork in an appropriate size dose for the collection. We know which stations provide basically useless semen, poorly packaged, or non-viable. Which stallions are reliable and which not to waste your money on. This is tracked and documented every season.

Stud stations will get more breedings and, therefore, make more money when the mare owners are happy, which means getting pregnancies, than when they are not. Mare owners deserve to get what they pay for and what they are told they are buying. We are all in this together, are we not? Where do the future stallions come from if mare owners are not successful? Are stallion owners looking at how many doses are provided and how many foals are on the ground?

If a mare owner splits a dose and gets lucky, good for them. If they do ET and get a foal, or ISCI and get a foal or 2 or 3, good for them! I am 100% positive they have 100 other stories about how the timing was perfect and how they followed all the protocols, but got nothing. Often 2,3,4 tries in a season to get the mare in foal. Dozens and dozens of doses that resulted in nothing. The mare did not settle,  they feed her until next year, just to try it all again.

The breeding doses are getting smaller, the quality is getting worse, and the prices are going up exponentially. Who is standing up for the mare owners who have spent tens of thousands year after year and gotten nothing? Bottom line if the ratio of doses sold to foals on the ground is less than 1 to 1, there should be no complaint.