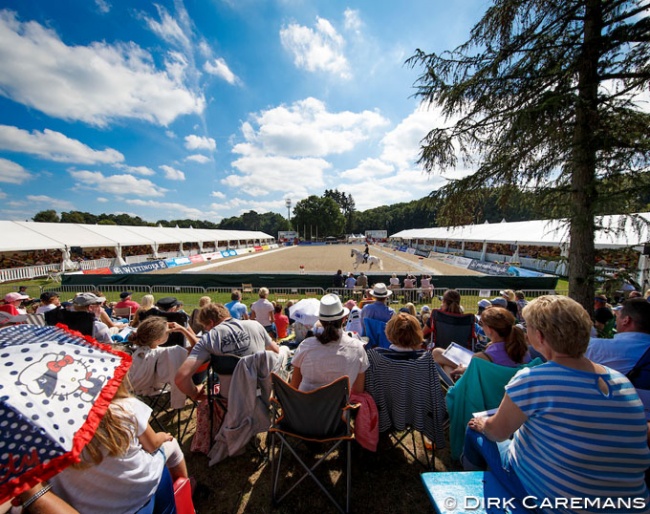 The FEI Dressage Calendar Task Force has met by teleconference on 16 April 2020 to discuss the reorganisation of the 2020 FEI dressage calendar, which has been upended by the corona pandemic.

While show organizers are craving to hear back from the FEI for confirmation of newly proposed show dates in the autumn season, the Task Force has only drawn lines and the sand with recommendations and made no decisions yet.

Recommendations to the Board

The DTF has recommended the FEI Board to approve the following resolutions until 31 December 2020:

The review of date clashes will be done on a case-by-case basis once applications and/or modifications are received from National Federations.

The DTF recommends that the impact of the requested date changes on the existing Events in the Calendar should be reviewed on a case-by-case basis and the DTF and the Dressage Committee should provide proposed solutions to the FEI Secretary General and the Board.

Recommendations for the 2020 Summer Championships

The DTF noted that discussions are ongoing with the relevant National Federations regarding the potential postponement of FEI North American Youth Championships.

The 2020 NAYC edition is scheduled for August 2020 in Traverse City, MI. A suggestion was made to move the NAYC to December 2020 with Wellington, Florida being a potential venue, but the USEF has signed a three year contract with Traverse City, Michigan (USA) to host that event.

The Verden show organisation proposed a new date for the World Championships - 9 - 13 December 2020.

Dr. Klaus Miesner, executive director of the breeding department at the German Equestrian Federation, told Eurodressage that "The OC Verden and NF GER made a proposal for a change of date on April, 8th. That was even before mass events were prohibited until August 31st by our government one week later. The FEI Task Force for Dressage is currently considering this proposal and has been in discussion with us about the issue. I hope for the final decision very soon."

The FEI Dressage Task Force has rejected the December date as they clash with the busy World Cup Qualifier schedule in December (Salzburg, London, Mechelen).

The DTF believes and recommends that the WCYH Verden

The Chair of Dressage Committee and the Dressage Director to consult with World Breeding Federation for Sport Horses to ask for a new proposal for a change of date.

The 2021 Dressage European Championships are scheduled to take place in Budapest (HUN), 23-29 August 2021, but that are now three weeks after the 2021 Olympic Games in Tokyo

The DTF stated: "based on the confirmation from the Organiser that will not be in a position to host the Championships for the Olympic disciplines on a different date the DTF agrees that no Championship for Senior shall take place in Europe in 2021.

"At the request of the Organiser, the DTF (with the abstention of the Chair of Dressage Committee, Frank Kemperman, whose son Joris organizes the WCYH) recommends to change the dates to 25-29 August 2021," the DTF stated.

Due to the fact that all but one of the Events have been cancelled, the DTF recommends to cancel the Series.

The DTF suggested that this shall be reviewed later this year by the Dressage Committee with a recommendation to the FEI Board.

Possible initiatives to help Organisers in 2020

The DTF took note of the decisions taken by the FEI Board on 15 April 2020 as follows:

The next DTF teleconference meeting will be on 28 April 2020 to review the applications received and collectively share the responsibility to accept and/or reject the application of date changes for higher level events in the FEI Calendar during the Covid-19 period.