Kontestro DB, Talk of the Town at 2020 CDI Le Mans 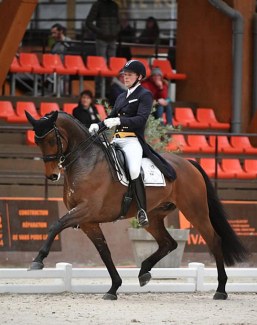 At the 2020 CDI Le Mans, Finnish team rider Henri Ruoste has showcased a new ace up his sleeve for Tokyo: Kontestro DB.

The pair made a fabulous international show debut in Le Mans with two second places in their very first CDI Grand Prix and Grand Prix Special.

Kontestro DB is a 10-year old Belgian warmblood gelding by Contendro I out of Esther DB (by Cassini II).

The talented bay gelding was scouted in Belgium by German horse dealer Jochen Arl in 2018. He purchased the gelding together with Ruoste to be developed as a future sales horse.

Henri, who has been Arl's protegé of ten years, patiently trained the green Grand Prix horse up the levels, before taking him out for his premier.

"I had to wait two years for this debut, but Henri was right to keep me waiting patiently so he could achieve this phenomenal show debut in Le Mans," said owner Jochen Arl beaming with pride. "The horse is still very green, but he has certainly shown his top quality and talent."

While the combination has been two years in the making, their budding partnership seems to have no limit to their potential.

For their Grand Prix Special they posted 71.745% on the board for another second place finish behind British 2012 Olympic silver medal winner Laura Tomlinson.

"There were still a few small mistakes in the Special, but already the frame was much better," said Arl. "The horse had never done a Grand Prix Special before. Henri only trained the bits at home, but now he rode them for the first time in a full test. There is so much more in the tank and I think this horse can score 80% when all the pieces come together."

Talk of the Town

Ruoste, who unlocked an individual starting place for his country Finland at the 2020 Olympic Games, is the hot favourite to be selected by his national federation for the Tokyo.

The beautiful bay gelding Kontestro DB became the talk of the town in Le Mans after scoring such high marks on his first international.

"The sale of the horse will be assessed after the Olympic Games to ensure perfect possible preparation; Henri now has him as a Tokyo option alongside his own horse Rossetti, which he rode at the 2019 European Championships in Rotterdam," said Arl. "I'm very grateful to the whole team behind Kontestro at Gut Bertingloh and especially to Henri's wife Senta for her care."