Kasimir TSF Retired from Sport and to Stand at Stud 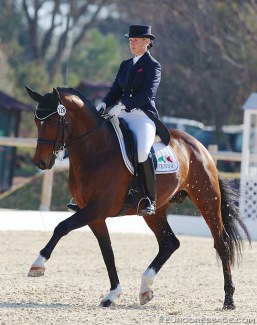 Bernadette Brune's Trakehner licensed stallion and small tour horse Kasimir TSF has been retired from competition sport and will be standing at stud at Gestüt Elmarshausen for the 2020 breeding season.

He is bred by Petra Wilm from Gestut Tasdorf and was initially owned by Dr. Elke Söchtig, who sold him to German Grand Prix rider Bernadette Brune,  when she was still based at her yard Domaine Equestre des Grands Pins in Vidauban, France.

He became a premium stallion at the 2004 Trakehner Stallion Licensing in Neumunster and did his 30-day performance test in Schlieckau in 2005, scoring 8.50 for dressage and 7.49 for show jumping. A year later he did the 70-day testing in Marbach and scored 129.47 for dressage, the highest dressage score of the lot, and 94.52 for show jumping (8th). He totaled 1320.62 points and placed 2nd out of 14 participating stallions.

Kasimir was mainly focused on sport instead of breeding, although he sired Kambra, the 2010 Trakehner Mare Performance Test winner and licensed son Dow Jones.

He was first competed as a 3-year old by Katja Camp in 2005. He won silver at the Trakehner Championships and placed 11th at the 2005 Bundeschampionate. A year later Philipp Hess took over and as of 2007 he moved back to Katja and Lydia Camp's stable. In 2008 he finished 15th in the consolation finals at the Bundeschampionate. In the autumn that year Regine Koch showed hum, followed by Hannes Lütt.

As of 2010 Kasimir partnered with Anna-Lena Kracht and they competed at small tour level and in the Young riders' classes. They were 5th at the 2011 German Young Riders Championships. Kracht rode him until his sale to Brune in the autumn of 2011.

Bernadette Brune and Kasimir began competing at international small tour level in the spring of 2012 through 2015.

In 2015 Kasimir competed in the brand new children's division under Bernadette's student, Russian Anastasiya Pavelko. The pair represented Russia at the inaugural European Children Championships in Vidauban and placed fifth.

The pretty bay stallion's talents were at small tour and as Brune moved up to Grand Prix she leased the stallion as a small tour ride to Sophie and Franziska Kampmann in 2016.

The last few years Bernadette Brune has been operating from her German base, Gestut Brune in Bad Zwischenahn, and she has now decided to retire Kasimir from sport and have him stand at stud.

As of February, Kasimir will be standing at Gestüt Elmarshausen for the 2020 breeding season.

"In his career Kasimir achieved 19 victories at S-level and more than 50 placings at S-level," said Brune. "He has two licensed sons so far and sired 20 state premium mares. In 2015 he was second on the World Ranking List for Children, which proves his outstanding character and rideability. I'm looking forward to our collaboration with Gestüt Elmarshausen and wish all breeders a good season."