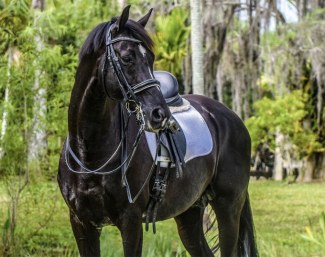 The KWPN licensed stallion Dark Pleasure has passed away at his U.S. home in Loxahatchee, Florida, on 26 December 2019, after having developed laminitis.

Bred by Wouter Plaizier in The Netherlands, the 2008 born stallion was by Ufo out of Wild Pleasure (by Jazz).

He was first competed by German Jana Freund on the 2012-2013 KWPN Stallion Competition circuit. They finished 17th in the semi-finals of the 2012 Pavo Cup. Under Gerdine Maree Dark Pleasure qualified for the 2013 World Young Horse Championships in Verden, but was withdrawn due to an injury. They finished fourth in the 2015 KWPN Stallion Competition Finals at Z-level.

In the early spring of 2016, Dark Pleasure sold to Femke de Laat and Dirk Kosters. They sold the stallion in 2018 to American Anne Howard (née Schmidt). He arrived at Stal Hoog in 2019.

Stal Hoog and its partners have three mares in foal to Dark Pleasure for 2020, in addition to others.

“He was my whole heart and a piece of me went with him,” said Katie Hoog. “We didn’t have enough time together but every moment I was with him or in the saddle was a cherished one. He never said ‘no,' he only said “Ok, let’s try.” He was the sweetest horse I’ve ever met. He was learning the one-tempis with ease and his piaffe was getting stronger every day to compliment his amazing passage. We were gearing up for the 2020 Global Dressage Festival and are now so sad to not be able to show the USA this very special horse. Our hearts are broken.”