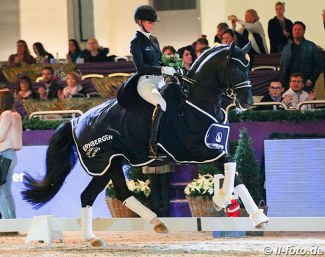 Twelve qualifiers were held throughout Germany the spring and summer season and the winners of each qualifier were eligible to compete at the Finals in Frankfurt.

Freese and Paul Schockemöhle and Lone Boegh Henriksen's black stallion Total Hope (by Totilas x Don Schufro x Sandro Hit) arrived in Frankfurt as the pair that achieved the second highest qualification score this season (77.293%) at the Schockemöhle organizer qualifier in Redefin. In Frankfurt, the pair showed that they were on a mission to win when they took first place in the warm-up class on Thursday with 77.610%.

Freese and Total Hope smashed the Finals on Saturday 21 December 2019, drawing a winning score of 79.220% out of judges Ebert, Lehrmann, Plewa, Wüst and Holler.

Total Hope is bred by Christine Arns-Krogman and is out of Isabell Werth's medal winning Weihegold. Freese is the head rider at Paul Schockemöhle's stallion station and she has represented Norway at the 2017 European Championships in Gothenburg on Bordeaux (by United). Freese previously won the Nurnberger Burgpokal finals in 2016 aboard Vitalis (by Vivaldi x D-Day), which is also owned by the duo Schockemöhle/Boegh Henriksen.

"I am overwhelmed and mega proud of my horse," said the 40-year old Freese about her licensed stallion. "He manages the two-pronged career of sport and coveted breeding stallion like a professional. He learns so quickly and is totally bomb proof. He loves working, and he really makes every day a lot of fun."

The runner-up in the finals was the pair that came to Frankfurt having achieved the highest qualification score of the season (78,024%) at the CDN at Gestut Bonhomme in Werder: Kira Wulferding and Bonita Springs.

Wulferding and Ulla Katzorke-Hellweg's 7-year old Rhinelander mare Bonita Springs (by Boston x Fidertanz) were second in the warm-up round with 76.293% and firmly held on to that position in the Finals with 78.512%.

Freese admitted she felt the pressure from Wulferding breathing down her neck. After winning, Isabel admitted, “to be honest, when I heard outside how many points Kira had got with Bonita I was really asking myself whether we could actually still do it."

Trained by Wolfram Wittig, Wulferding also received the "equitation prize" at the end of the day as the rider with the best riding style.

Aboard Rebecca Guttmann's 9-year old Hanoverian stallion Cadeau Noir (by Christ x De Niro), Waldmann slotted in third in the warm up with 75.854% and third in the Finals with75.537%. With the 7-year old Oldenburg stallion Morricone (by Millennium x Rubin Royal) she was fifth on 75.073%.

"My boys are rock stars," Waldmann took to Instagram. "If you can dream it, you can do it!"

Photos © LL-foto - Photo gallery at the bottom of the page