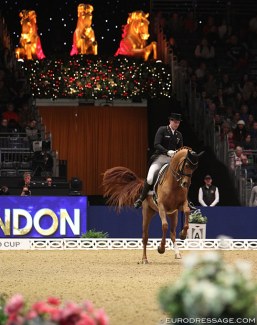 For 21 years I have been covering international horse shows all over the globe, but I had never attended Olympia Horse Show in London. With version 2.0 of the short Grand Prix test being ridden at this year's edition, it had no excuses left not to go. And I must say the event lived up to its reputation of being different, fun and magical.

I have to confess that I am not a big fan of the World Cup circuit as I find the entry field at the Western European League events highly repetitive, self-indulgent based on the country where it is held, and from an economical viewpoint such small shows are often too expensive to travel to, as you need to pay for the journey, the hotel and food and then just watch 15 riders - the same as always - go. And then I'm not even mentioning how the judging of the freestyle remains to be a crap shoot as there is not proper system set up to adjudicate the artistic part of a freestyle.

But I value the intimacy of a well run indoor World Cup event. Amsterdam is able to generate a nice familiar and cosy atmosphere, Den Bosch does it best, Stuttgart has lost all its shine and Mechelen is only fun for show jumping. The World Cup Finals, themselves, are always different because they do generate the thrill of a Championship with the best of the best staring in each others' eyes. However at Olympia something special happens.

I can truly appreciate the architecture of the Olympia Exhibition Centre in West Kensington. Its big steel frame construction reflects the history of time when steel dominated the world at the end of the 1800s;  just think of the Eiffel tower, the Grand Palais in Paris, Grand Central in Antwerp, or the skyscrapers in New York. This was the era of mankind literally reaching for the sky and Olympia's glass ceiling illustrates that man knew no limit and was looking up into space. Quite different from the square concrete boxes in the run-down industrial parts of cities where World Cups are usually held.

Olympia Horse show was first held in its current form in 1907, although an agricultural show (known as the first great horse show) has been held there since 1888. Horsemanship in the U.K. is different from elsewhere. It is deeply rooted in society and attention is given to all disciplines, which makes its programme interesting for every horse owner. In between competitions, there is a Shetland pony race, an exhibition by the Mounted Horse Guard, freedom training with Jean François Pignon, to name a few of the crowd pleasers that keep the line-up of events entertaining.

Which indoor event sells out for the Grand Prix on a Monday, a week day and the first day !? Not a single one, except Olympia! You might argue that it's the attraction of Christmas shopping in the capital of London to makes the people flock together, but it is not.

Education draws the crowd! The Monday programme is a combination of high performance competition, entertainment and education. In the "Dressage Unwrapped" section, which started at 16h o' clock, with regular intervals for some shopping in the stellar trade fair, glitzy names of British dressage revealed their secrets to success in sport. Gareth Hughes commented on his ride on rising GP horse Sintano van Hof Olympia. FEI Judge General Stephen Clarke did live scoring on Jessica Dunn's Intermediaire I test after which her coach Richard Davison put Clarke's tips in practice with a short public lesson. British eventing star Pippa Funnell showed how she does flatwork with poles on one of Judy Harvey's horses while Richard Waygood provided explanation and tips for home training with poles. Charlotte Dujardin showed off her next future Grand Prix star, the 8-year old Dutch warmblood Gio, who is becoming the spitting image of Valegro in his silhouette and musculature.

All the riders gave little nuggets of wisdom to take home and put in practice. Carl said that if you want to be sure that you have the right bending, "you look and see the letter through the horse's ears. Then you'll have the right bending." He also stressed the importance of a strong core. "If you pull the horse underneath you, you should land on your feet. Your body should not be behind the vertical." I personally liked his simple statement: "if you walk a horse and it relaxes straight away, you know you have trained without tension."

I'm not a big shopper and I browsed through the trade fair quickly. Olympia's unparallelled. It's not one tack shop after the other selling the same brands and gear, but there are more lifestyle items (normal clothes, jewelry) and information booths; there is a clear emphasis that the horse lover is also a dog lover.. and a gin lover, because I think I so no less than 7 booths selling British gin.

And I haven't even mentioned how the work crew at Olympia - the organizers, the press centre, the judges - as well as the crowds dress up for the occasion in suits, festive gowns and party outfits. It is so refreshing to see some style and class infused into a horse event. Male press, for instance, wears a suit instead of their usual fleece and rain protective mountaineering gear, as if they are ready to walk the camino to Santiago de Compostella.

Aah, and I didn't even mention that they serve champagne in the press centre! But I kindly declined a glass of Taittinger as a serious journalist is not a drunk one.