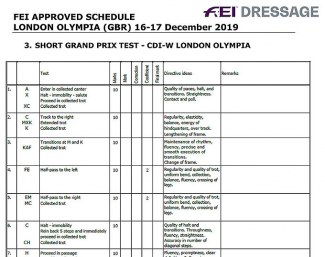 The FEI and the organizer of the CDI-W London Olympia International Horse Show have agreed to host "round two" of the pilot project for a new short Grand Prix test.

In October 2018 the FEI Dressage Committee surprised all by suddenly announcing the existence of a new short Grand Prix test and its scheduled trial at the 2018 CDI-W London with as goal "to maintain a pacey and interesting competition on the first day, keep the audience engaged, expose emotions with direct interview of the athletes still mounted at the end of the test."

The new test fit perfectly into the FEI's aim to make the sport more "entertaining" and to achieve more "air time on television", while the true dressage lover wants to see a sport that answers to the principles of classical dressage. Ironically the live streaming of the 2018 Olympia shortened Grand Prix did not work and there was no TV channel even broadcasting this "pacey" class.

Remarkably the FEI had given it little thought that the 2018 London Short Grand Prix also counted for FEI World Ranking Points and MES scores, creating an unlevel field of play, especially because the test is easier to ride and the World Cup shows are highly invitational based with the line-up of riders decided by the show organizers.

After the 2018 pilot project at Olympia, riders and stakeholders complained about the test. By shortening it to save time, the essence of dressage was sacrificed.  Furthermore, riders that competed in Olympia said that the lines did not flow enough.

Suddenly at the beginning of September 2019 a press release by the German Federation was posted that a trial for new versions of the short Grand Prix (and other tests) had taken place at the DOKR headquarters in Warendorf. Press was not invited.

For the Warendorf meeting the FEI had called in the expertise of riders Isabell Werth and Hubertus Schmidt and German team trainer Monica Theodorescu.  Three test riders were invited to the meeting: Marcus Hermes, Bianca Nowag, and Claire-Louise Averkorn.

Frank Kempermann, chair of the FEI Dressage Committee, made the following statement about the meeting: "We had good conditions here, thank you to all participants. It was a very interesting test and we gathered lots of impressions and findings, which we will discuss in the committee."

Round Two of the Short Grand Prix Pilot Project

Last week the FEI published the schedule for the 2019 CDI-W London and the programme mentioned that a 2019 edition of a short Grand Prix test would be ridden there. Without any official announcement "Round Two" of the Short Grand Prix pilot project will take place in London.

This time the schedule makes explicit mention that

Eurodressage interviewed Richard Davison, who is closely involved in getting the Short Grand Prix pilot project to London. We asked him what his expectations were of this year's project.

"Aside from that I hope the test rides as well as it seemed to in Warendorf, my focus is on the class and the entire spectator experience," Davison told Eurodressage. "My goals are the same as for last year’s pilot - to assist Simon Brooks Ward (London show organizer) in his endeavours to make the World Cup GP class as appealing, dynamic and educational for as wide a spectrum of equestrian enthusiasts and their families as possible, PLUS satisfying the purpose of the class in the context of the FEI World Cup winter indoor series, namely the requirement to provide a GP standard test without too many unnecessary repetitions in the interests of the horses. It is a balance, and that is why we are offering to run another pilot for the FEI and the sport."

One of the major complaints about the 2018 edition was the removal of movements that test submission, harmony and lightness.The halt-rein back, the zig zag, and difficult pi-pa transitions were all scratched to save time.

Katrina Wüst, a German 5* judge who has shown great willingness to work hard on fine-tuning the judging system and new tests in several working groups, told Eurodressage she was unaware that the 2019 edition would be tested in London.

When asked about the changes in the 2019 edition, Katrina could not say much: "The new Grand Prix has many difficulties in it, even the rein back and (it) is even shorter."

We also asked her why the existing Short Grand Prix is not being used. It the early 2000s this test was in use for the World Cup circuit as the Grand Prix is only a qualifier for the Freestyle, in which World Cup points are the be earned. However it was dropped in favour of the classic Grand Prix.

"The Short Grand Prix was never an option because it has been sorted out 20 years ago for being too easy," Wust told Eurodressage. "It was the test in the World Cup shows but the top riders stood up against it. That’s why it is used for the Under 25 riders now."

The 2019 edition of the Short Grand Prix test was included as an annex in the schedule of the 2019 CDI-W London.

The new test very much resembles the classic Grand Prix but has two diagonals extended trot and one piaffe-passage tour (the one with the transition from walk) removed, and 11 one tempi changes are ridden on the centerline in between the pirouettes, like in the Grand Prix Special. The flow of this test seems vastly improved from the spaghetti lines in the 2018 edition.  Olympia will tell if this version has a future.