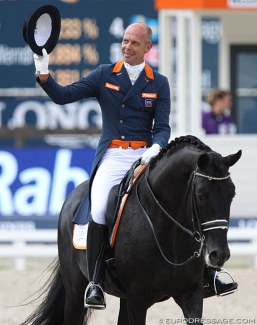 Holland's star duo Hans Peter Minderhoud and Dream Boy will not be competing in the World Cup qualifier of London on 16 - 17 December 2019.

The combination has withdrawn their entry yesterday.

"Unfortunately  Dream Boy has a bit fever, so we won't take any risk and "Dreamy" will stay at home," it read on the Glock Facebook page.

The 2019 CDI-W London, also known as the Olympia Horse Show, will be giving a new test platform to the Short Grand Prix test, version 2.0, on Monday 16 December 2019. Eurodressage will be on the scene for this test event.