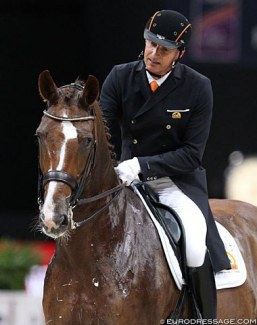 Patrick van der Meer has sold his number one Grand Prix horse Zippo to Dutch rider Kimberley Luijten who is aspiring to compete at Under 25 level.

Zippo is a 15-year old Dutch warmblood gelding by Rousseau out of Niky (by Haarlem). He is bred by W. van Rooij.

Patrick discovered the liver chestnut as a yearling and trained him from novice to Grand Prix himself. They competed in the Pavo Cup qualifiers and selection trials for the World Championships but did not make it to the actual Championship.

Their career highlights were representing Holland at the 2017 European Championships in Gothenburg, where they stepped in for Scholtens and Apache and ended up 19th in the Special, and at the 2018 World Cup Finals in Paris, where they were 16th in the Kur.

Van der Meer has now sold Zippo to his student, 23-year old Kimberley Luijten, who has been working with Patrick for the past eight years.

"Initially I had the idea to ride more competitions and keep him for my daughter Dana who will make the transition to Young Riders next year. In fact, Zippo is more a Grand Prix horse than a small tour horse and he is more into his own in Grand Prix," Van der Meer told Horses.nl.

Chinook takes over the Baton

The mare Choco Chanel, who was highly successful at international small tour level in 2015, is now a broodmare.