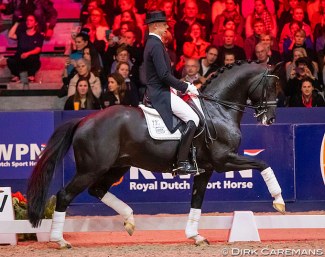 The Hanoverian bred Toto Jr (by Totilas x Desperados) is the best represented sire at the pre-selection days for the 2020 KWPN Stallion Licensing with 29 sons entered.

The high amount of colts presented comes as no surprise as Toto Jr was the most used sire by dressage breeders in The Netherlands in 2016. He sired no less than 369 foals born in 2017 and registered KWPN.

Five hundred show jumping, dressage and Gelderlander colts have been entered for the pre-selection days which take place between 27 November 2019 - 10 December 2019.

The dressage colts pre-selection takes place 3 - 7 December 2019 and 272 colts are entered for that.

The starting lists for the pre-selection will be posted here.