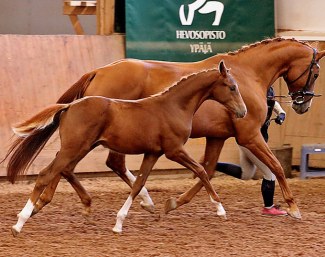 The event was judged by representatives from three different studbooks: Bernhard Thoben from the German Oldeburg Society (GOV), Ira Hagemann from the Hanoverian Society, and Anna Pajanen, Carl-Harry Frey, Annu Stenqvist and Liisa Kaitala from the Finnish Warmblood Society.

On Saturday approximately 70 foals were presented:  in the morning the foals with a jumping pedigree and in the afternoon it was time for the dressage foals.

The champion foal of the 2019 EBEF was the Finnish Warmblood colt Ridaaja's First Son (by Fürst Jazz x Sir Donnerhall I), bred and owned by Ratsutarvike Ridaaja Oy. He scored an overall result of 9,03.

The judges also ranked the foals according to breed.  The best Oldenburg foal was the colt Sheldon Carrus (by San Amour x Davignon II) and the best Hanoverian foal was filly So Luzy Carrus (by So Unique x Sir Donnerhall I). Both are bred and owned by Mty Niiranen Helena & Jukka of Carrus Dressage.

On Sunday the focus was on the "older" young horses, as a Hanoverian Championship for 4-year old riding horses and a Hanoverian mare show was being held as well as studbook inspections and a mare performance test. The day ended with classes for 2-3yo in both free jumping and movement in freedom.

In the 2-year old mare class the winner was the Finnish warmblood Fraulein T (by Foundation) with a score of 8.16 points, while Finnish Warmblood mare Fairuza (by Feinrich) was second with 8.0 points.

The Hanoverian Championship for 4-year olds was won Fürstentanz Carrus (by Furstenball x Wolkentanz I) with an 8.06 point score, ahead of Fair Liberty (by Fidertanz x Lauries Crusador xx) with 7.8 points.

The event was broadcast live the entire weekend and the videos can be found on Youtube after the event.