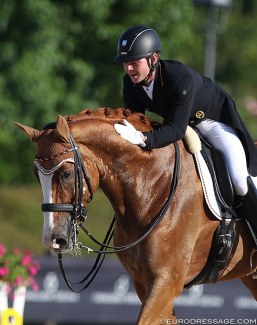 Riders that compete on the circuit are selected by the German team trainers based on a training seminar held in Warendorf, Germany, each February. There they are assessed by the selectors in a training session and in a test. A group of approximately 16/17 riders is picked to compete at a series of four qualifiers held in spring and summer throughout Germany (Balve, Wiesbaden, Verden and Ising).  The best scoring riders on the circuit are invited to the Finals, which are held at the CDI-W Stuttgart in November.

The winner of the 2019 Piaff Forderpreis selection trial, Alexa Westendarp and Der Prinz (by Diamond Hit), are not going to the Finals. Westendarp rode her second horse, Four Seasons, to team gold at the 2019 European Young Riders Championships in San Giovanni in Marignano, Italy, in July.

"For me the young riders tour was the priority this year, because it's my last year as a young rider," Alexa explained. "That's why I could not participate in all the U25 qualifiers."