Eva Möller and Valverde Win 5-YO Qualifier at 2019 Bundeschampionate 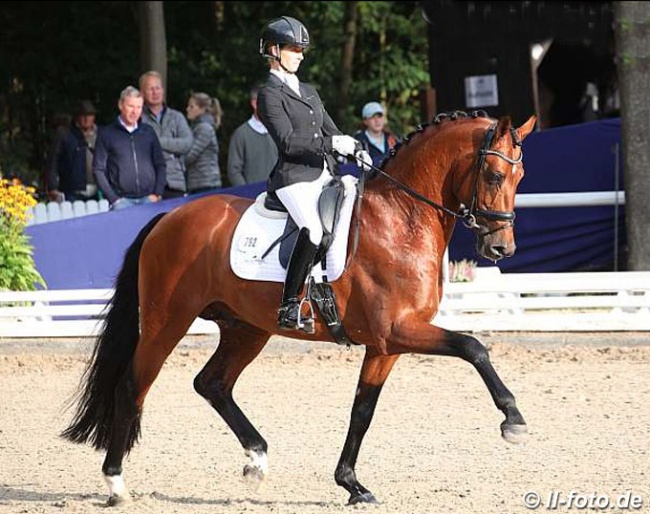 Eva Möller showed that she is on track for another Bundeschampion's title by winning the 5-year old preliminary test and qualifier for the finals at the 2019 Bundeschampionate in Warendorf, Germany, on Thursday 5 September 2019.

Traditionally the 5-year old division at the annual German Young Horse Championships is the biggest dressage class of the show and this year no less than 73 combinations qualified with a score of 8.0 or more at the spring and summer qualification shows throughout the country.  Because of the higher number of participants, the class was split into two groups.

The winner of group one was also the high scorer of the division. Eva Möller steered Andreas Helgstrand and Cathrine Rasmussen's Westfalian licensed stallion Valverde (by Vitalis x Ampere) to victory with an 8.9 total. The bright bay stallion received 8.5 for walk, and 9 for trot, canter, submission and general impression.

The winner of group two also achieved the second highest score of the day, 8.8. Luxembourg's Kristine Möller and Jens Thorsen's Hanoverian mare Quatre Quarts a l'Orange (by Quaterhall x Royal Blend) earned that 8.8 total after posting 9 for walk, 8.5 for trot and canter and 9 for submission and general impression.

The third best score was achieved by Nicole Wego on her home bred Rhinelander mare Quiana (by Quaterstern x Rubinstern Noir). They got 8.5 for walk, trot, canter and submission and 9 for general impression to finish second in group one with 8.60.

Anna Sophie Fiebelkorn and Axel Windeler's Hanoverian gelding Don Mateo (by Don Juan de Hus x Royal Highness) were the runners-up in group two with 8.5. The black gelding earned 9 for walk, 8.5 for trot and canter, 8 for submission and 8.5 for general impression.

Placing third in group one was Greta Heemsoth on Ingo Pape's Westfalian gelding Anthrazit (by All At Once x Weltmeyer) with 8.3., while Susan Pape steered Leslie Malone's Oldenburg stallion and PSI auction highlight V-Plus (by Vivaldi x Furst Romancier) to a third place in group two with 8.2.

It was an off day for 2017 Bundeschampion Finest Selection OLD (by Follow Me x Lauries Crusador xx). Swedish Grand Prix team rider Therese Nilshagen had to retire the black stallion from the preliminary test as he refused to go.