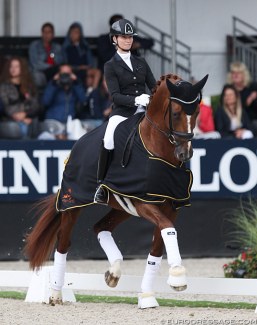 Eva Möller and the Hanoverian licensed stallion So Unique became the winners of the pilot project for 4-year olds at the 2019 World Championships for Young Dressage Horses in Ermelo, The Netherlands, on 1 - 4 August 2019.

In 2016 Ermelo hosted an inofficial 4-year old championship, exclusively for stallions. Although this initiative was very well received, the class was scratched from the schedule the next year.

This year, Hungarian entrpreneur Arie Yom-Tov of Sport Pro Horses in The Netherlands decided to bring the 4-year old division back on the WCYH programme as a pilot project open to mares, geldings and stallions.

The 4-year old challenge was based on the FEI 4-year old test and consisted of a qualification round, in which the top 10 moved on to a finals, and a consolation round to give the youngsters more ring experience and exposure. While in the qualifier the horses entered the main stadium in pairs, for the finals test the horses were individually presented to the judges.

The 4-year old FEI test includes easy lines of circles and diagonals as well as some transitions up and down the three basic gaits.

The finals were judged by Christoph Hess, who also provided public commentary after each ride, and Belgian 4* judge Olivier Smeets.

The top 10 that moved on to the finals included no less then 8 stallions, one gelding and just one mare!

So Unique Wins the Pilot Project

Möller steered the Hanoverian stallion So Unique (by Sezuan x Donnerhall) to victory with 9.64 points. The chestnut does not have the scopiest trot, but has very good balance. He moves the hindlegs a bit out and is limited in the shoulder freedom. However, the walk is excellent and in canter there is very even, balanced striding and good self carriage. The judges rewarded him with 10 for walk, 9 for trot, 9.7 for canter, 9.7 for submission and 9.8 for general impression. So Unique is owned by Helgstrand Dressage in partnership with Cathrine Rasmussen.

Emmelie Scholtens and the Dutch warmblood stallion Kevin Costner (by Negro x Jazz) were the runners-up with 8.43 points.  The tall dark bay stallion, owned by the rider and her partner Jeroen Witte in partnership with Stable Turfhorst, has a very expressive, ground covering trot but the horse still depends on the rider for self carriage. The extended walk had a good rhythm but not the biggest overtrack and in canter he was nicely uphill but the balance still needs to improve. There were some submission issues with the canter strike off and a moment of resistance. He got  9.5 for trot, 8.3 for walk, 8.8 for canter, 6.8 for submission and 9.0 for general impression.

Lotje Schoots and her own KWPN stallion Kingdance (by Expression x Jet-Set D) landed third place with 8.14 points. The bay had a trot that was quite balanced with a functional, active hind leg, though a bit limited in ground cover at the moment. The canter was springy and engaged, but the horse did not show much elasticity in the frame and ability to stretch forward. The walk was ok. Kingdance received 7.7 for walk, 8.5 for trot, 8.2 for canter, 8.0 for submission and 8.3 for general impression.

Another interesting note is whether this 4-year old challenge should be seen as a talent competition or should it reward the best trained 4-year old?

The finals showed a very mixed group of youngsters. One still struggled to go on the bit, even though it had good gaits; one was so green its balance was not there yet and maybe the horse was not ready to be presented in a competition, despite its innate quality. Another was ridden in such a high tempo to show off the horse's gaits, scope and talent, but the contact with the bridle was troublesome, not really reflecting patient classical training. And then there were those who had already advanced in their training so much they looked like 6-year olds without having the best gaits in the lot.

The green 4-year olds coped well with the FEI 4-year old test, but struggled most with the surroundings. It could be interesting to reconsider the format for 2020 in which either the finals are held in pairs as well, like at the German Bundeschampionate, so the youngsters are not feeling overwhelmed from being alone in the arena, or the qualification test is also ridden individually instead of in pairs. The former format is the most friendly one considering the horses' age.

Eurodressage was on the scene photographing all 4-year old finalists, as well as all 5, 6 and 7-year olds. If you are interested in photos for print or social media, send us an email.