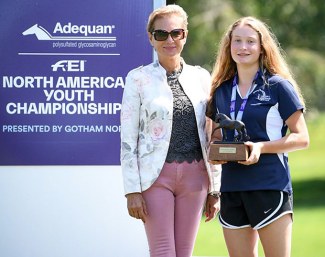 The organizing committee of the 2019 North American Youth Riders Championships recognized one athlete, one horse, and a chef d’equipe with special dressage awards on Sunday 4 August 2019.

The Dressage Style Award is presented to the rider that has shown “style” throughout the competition, not only when mounted, but also in the form of manners and overall demeanor. The panel of judges that voted on the winners included Ground Juries from both disciplines, veterinarians, Technical Delegates, FEI Stewards, Appeals Committee, and the NAYC Organizing Committee.

The HorsePower Trophy was awarded to Largo, ridden by Eliza Windsor (USDF Region 8) and owned by Maria Spak.

Started in 2011, the HorsePower Trophy is given to the horse that stands out from their peers at the NAYC. This award recognizes an outstanding horse, from any of the championship disciplines, who best demonstrates determination, courage, class, heart and the ability to inspire athletes and spectators alike throughout the competition.

The Albers Award is presented annually to the dressage Chef d’ Equipe, named in honor of long time Region 1 Chef d’Equipe, supporter and good friend, Patsy Albers, who best demonstrates the same level of dedication, enthusiasm and team spirit that Patsy has shown throughout the years. This award is open to all of the dressage Chefs d’ Equipe to be nominated by fellow Chefs d'Equipe by submitting a written explanation as to why that chef deserves to win the Albers Award.