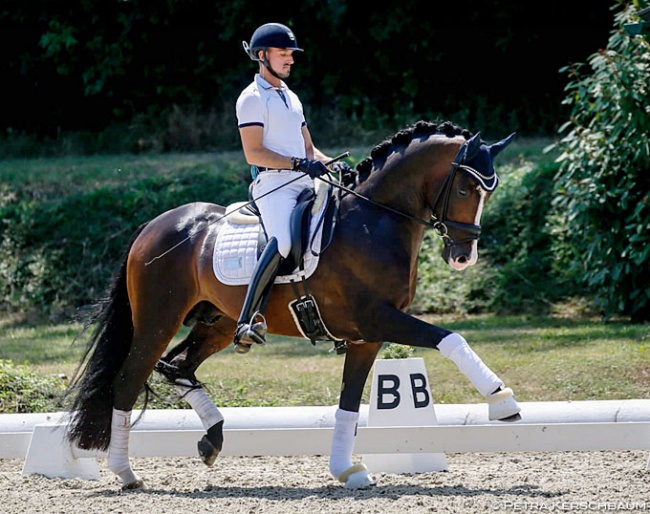 Manuel Springhetti and Jaristo, the highest scoring 5-year old combination at the Austrian selection trial for the 2019 World Championships for young dressage horses, will not be going to Ermelo.

"There was an appeal against the nomination of the non-registed horse," Sissy Max-Theurer, president of the Austrian Equestrian Federation (OEPS), confirmed to Eurodressage.

The team behind the combination Belinda Weinbauer/Francois filed the appeal against Springhetti, who is based in Denmark for the past 1.5 years. At the time of the qualifier Springhetti had not yet paid his Austrian rider's license and horse pass for Jaristo for 2019.

The Austrian WCYH selection trial took place at Gutenhof in Himberg, Austria, the home base of OEPS Dressage Manager Diana Wunschek, on 24 - 25 June 2019.

The judges at the event were Christof Umbach, Katrina Wüst and Elisabeth Koffmahn but the scores the horse's got were not officially posted. Instead they were communicated verbally to the riders.

According to the riders, Springhetti and his own and Andreas Helgstrand's KWPN stallion Jaristo scored the highest mark in the 5-year old division: an 8.5. Tamara Michei and Sissy Max-Theurer's Diamond of Eternity earned 8.45, while Belinda Weinbauer and Francois scored 8.35. Stephanie Dearing on Gioello got 8.33.

After the event Jaristo and Diamond of Eternity were nominated to go to Ermelo.  Weinbauer/ Francois were nominated as first reserves and Dearing/Gioello as second reserves.

However, soon after the event an appeal was filed by the owners of Francois: breeders Heinz & Martine Winter and Dietrich Sifkovits, who is the secretary-general of the Austrian Equestrian Federation.

OEPS confirmed to Eurodressage that Team Francois won the appeal and that Jaristo has been scratched from the entry list.

Richard Berger, sports manager at OEPS, wrote to Eurodressage that:  "By a complaint of a horse owner to us as Austrian Equestrian Federation, we were informed that Mr. Manuel Springhetti, although Austrian citizen, at the time of sighting neither had an upright Austrian license and the horse Jaristo had no Austrian tournament horse registration or results in Austria. Our reviews have shown that at the time of the sighting, from 24 to 25 June 2019, in Himberg and even before that date, these facts were in fact not present and therefore the viewing conditions were not met."

The official notification for the Himberg qualifier only requested from the riders to send to OEPS the pedigree of the horse, the ownership document and achieved results so far. The schedule does not mentioned whether the selection trial is an official "competition" (Turnier) according to OEPS  standard, or a specific selection event.

Springhetti told Eurodressage that before he made the journey from Denmark all the way to Austria for the selection trial, he asked the federation that it was ok for him to come down without his paperwork in order.

"I asked before I went to Austria to the selection and they said it’s ok. We can do everything when they choose me and now they changed everything," Springhetti explained. "They gave me the wrong information. First they said I only need the passport that I am the owner and rider, and a result over 75%. I had 84.6% (in Denmark) and I can come, everything is ok. Now nothing is ok anymore."

Eurodressage asked Berger for pointing out the OEPS rule/document, where it is stipulated that a passport/licence is required to ride in the Austrian WCY selection trial, as the trial is not officially listed as an OEPS sanctioned "competition". Berger replied: "the decision makers of the Austrian Equestrian Federation have made their decision in accordance with the rules. We ask you to note this and also ask for your understanding that we do not disclose content to the public or the media."

The Directors Committee of the Austrian Federation was "unanimously against a posting of Mr. Springhetti and the horse Jaristo, to the World Championships of Young Horses in Ermelo," as Berger reported on the decision of the appeal.

Springhetti was informed of the decision on 4 July 2019.

"At this time there was still no horse passport for a tournament horse registration in Austria," Berger continued. "Informative is informed that Mr. Springhetti paid the Austrian license on 28.6.2019. In addition, on July 1, 2019, he informed by telephone that the horse passport of Jaristo would be located at the Danish FN for the FEI registration."

The FEI database recorded that Alice Schwab, who was also in charge of the entries for the WCYH qualifier in Himberg, updated Springhetti's FEI passport on 2 July and the horse Jaristo on 3 July 2019. The OEPS passport database is not publicly accessible.

On 4 July OEPS changed the official nominations for Ermelo to include Francois as the 5-year old to go, alongside Diamond of Eternity. The definitive entry will be made on 18 July 2019.

Similar situations with paper work issues, rule and procedural changes have taken place at other federations in the lead up to World Championships participation the past few years. Also in Austria the importance and prestige of competing at the World Championships brings out rivalry amongst riders/owners.

What is most important? Sending the best horses to Ermelo or the application of the rules? What about situations were federations fail to communicate properly with the riders by not properly informing them on existing or changed rules, or taking the location and traveling of foreign based riders into account?

"I think the better horse should go and that is my horse," said a saddened Springhetti, "but i can’t change it anymore." Weinbauer chose not to comment on the matter.