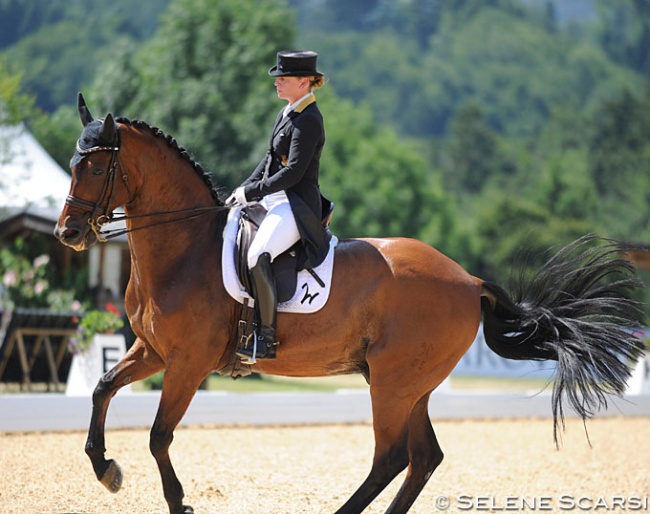 Isabell Werth and her 18-year old equine dancing partner Don Johnson proved that they still got moves and won the Grand Prix Kur to Music on the final day of competition at the 2019 CDI 4* Fritzens Sunday afternoon 30 June 2019.

Werth and Madeleine Winter-Schulze's Hanoverian gelding (by Don Frederico x Warkant) wrapped up the 25th edition of the Manfred and Hilde Swarovski Memorial Show at Klaus and Evelyn Haim-Swarovski's Schindlhof in the Tyrlean Alps with a victory in the final class of the event, their fourth win out of four starts on the weekend.

The 25th edition of the shows brought out record temperatures of 38 C° and attendees counting over 3,000 heads the show grounds on Sunday. This turned the total amount of spectators into more than 6,000 over three days. The CDI 4* drew out the VIP's such as  ÖSV-president Prof. Peter Schröcksnadel, slalom Olympian and Arabian breeder Mario Matt, Ski race Olympic champion Leonhard Stock and dressage Olympic champion Sissy Max-Theurer.

Six-time Olympian Isabell Werth was the star of the show and with 81.78% in the freestyle, she and Don Johnson clocked their 53rd international Grand Prix level win in their career. The horse is set to retire from competition sport soon.

"I'm thankful to Johnny for braving the heat and therefore I only did a very short warm up," said Isabell. "I'm also grateful to the Haim-Swarovski couple, their children Marie and Max and the entire team at Schindlhof. Year after year they are able to bring together a new, familiar atmosphere and top sport. I actually sent home an extra photo as people there believed I was on holiday here, because it's so beautiful here."

Werth's student Lisa Müller ranked third aboard her 16-year old Baden Wurttemberger gelding Dave (by Denaro x Rehberg) which she initially bought as a schoolmaster and who has proven to be more than competitive in an international field. They posted 76.425% for third place.

"A beautiful end to a great weekend," said Weinbaur. "August did a super job as this was only her third international Grand Prix test."

Weinbauer brought two horses to Fritzens: Fustanella and Fraulein Auguste as her 2017 European Championship ride Sohnlein Brilliant hasn't been out to show in a year. Both mares now get a short break and will then pick up training again towards the 2019 European Championships in Rotterdam.

Austrian Stefan Lehfellner saddled Sissy Max-Theurer's 14-year old Oldenburg gelding Fackeltanz (by Florencio x Feinbrand) and placed fifth in the freestyle with 75.020%. In April he had briefly given the ride on the black to his life partner Victoria Max-Theurer for one show in Ebreichsdorf, but a month later he was back in the saddle of the former licensed stallion.

"I'm very proud of Fackeltanz that he did all well in these temperatures," said Lehfellner. "The mistake at the end of the test is mine. I'm very impressed by this horse."