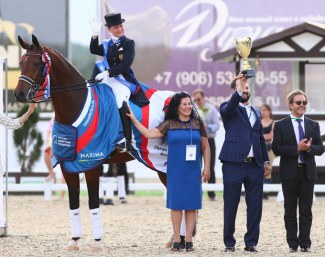 Russia will be represented by a Dressage team at the Tokyo 2020 Olympic Games after claiming the single spot on offer at the Group C Dressage qualifier staged at Maxima Park in Moscow (RUS) on Sunday 23 June 2019.

“It was the first time I performed in my motherland, usually I perform in Europe where sometimes I am the only participant under the flag of Russia at the event. Here I feel great support and at the same time all of us feel a big responsibility in this tournament. I fully concentrated on my performance, and each of us did everything for the sake of this victory today!” said Russia’s Tatyana Kosterina.

And the talented team from Belarus were gracious in defeat. “We are not rivals, we are all friends here. Of course, the Russian team is very strong. I think that we also managed to perform our best. We have a very young team” said Hanna Karasiova.

The Russians were looking good from the outset as Chef d’Equipe Anatoly Isachkin pointed out at Thursday’s team announcement. “Our riders are all fairly experienced, three of them constantly perform and live in Europe - Elena Sidneva, Tatyana Kosterina and Evgenija Davydova. They have all been showing good results and we are optimistic - we want to win and to finally get a team to the Olympic Games!” he pointed out that afternoon. Today they succeeded in doing just that when filling four of the top-five places.

Svetlana Evschik, Chef d’Equipe for Belarus, said during the teams announcement press conference that “the absolute leader of our team is Anna Karasiova and her horse Zodiac. There was a short period when she did not perform but nevertheless she showed good results in Nizhny Novgorod World Cup leg and we hope that the same will happen now. The second strong rider of our team is Olga Safronova - a rather young rider, last year she made her debut in the Grand Prix - she doesn’t have much experience in the Grand Prix, but her horse is very interesting and bright, and represented our country at the World Cup Final in Paris. Volha Ihumentsava competed at the European Championship but her horse was injured a year ago and in April 2019 it just took its first start after recovering. The fourth rider is a young athlete who can still compete in the U-25 category - Anastasiya Dudkova”, she explained.

It was Dudkova (22) and her easy-moving 11-year-old Trakehner gelding, Hofman, who were pathfinders for Belarus, posting a score of 61.043 before Karasiova (35) and her gelding Zodiak lived up to their billing when putting the leading score of 69.804 on the board at the halfway stage. Ihumentsava (34) and the Hanoverian Ed Khardy earned a mark of 63.543 and then Safronova (27) and the impressive Sandro D’Amour rounded up the Belarus effort with 65.370.

Davydova (35), who along with Kosterina and Sidneva was a member of the Russian team that finished tenth at the FEI World Equestrian Games™ 2018 in Tryon, USA, threw down the Russian challenge with a highly competitive score of 69.022 from her dark-bay KWPN mare, Awakening. And when Kosterina (41) backed that up with 69.087 from her mare Diavolessa VA, then the hosts were already looking very confident.

The Swedish spectators fell in love with Regina Isachkina’s (48) fabulous black stallion, Sun of May Life, at this year’s FEI Dressage World Cup Final in Gothenburg (SWE) where they finished 15th. And although the pair didn’t show the same level of harmony today, their score of 67.022 had already secured that treasured Tokyo qualifying slot even before Sidneva (54) entered the ring.

Biggest absentee at the qualifier was Russian number one, Inessa Merkulova, whose Mister X has been struggling with a hoof injury after a transport accident since September 2018. Merkulov told Eurodressage that the horse is back in work and they are aiming to make a come back at the CHIO Aachen in July.

Test by Louise Parkes for the FEI, edited by Eurodressage
Photos © Maxima Park