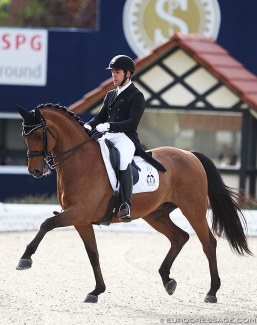 Sir Schiwago is by Sir Donnerhall out of Dajana (by Lanciano) and bred by Josef Sichler.

He was a licensed stallion, but ended up being gelded for sport. He was the champion of the 2009 South German Stallion Licensing in Munich. The same year he did the 30-day performance test with an 8.23 score for dressage and 7.63 for jumping. Based at the Zweibrucken state stud, he only bred to a limited number of mares, but did sire one approved son, San Mateo.

As a youngster he was first shown by Carolin Töpel, Marco Lilienbecker, and Monika Schnepper before moving to the stables of Ingrid Klimke. She competed him at L-level in 2011 and at M-level in 2012.

After a three year gap, away from competition sport, Sir Schiwago resurfaced in Spain where Russian owner Irina Zakhrabekova had moved the bright bay to. Under Jose Antonio Garcia Mena the gelded Sir Schiwago became quite active in the show ring. They made their international show debut at medium tour at the 2015 CDI Oliva and by the autumn of 2015 they were competing at Grand prix level.

Between 2017 and 2018, Mena and Sir Schiwago campaigned at CDi's in Madrid, Jerez, Fritzens, Medina Sidonia and Segovia with mixed results going from 60% to 73% in the Kur. The CDI Segovia was their last show together in May 2017. At the Spanish Grand Prix Championships, the pair was 8th in 2016 and 2017.

Zakhrabekova decided to sell Sir Schiwago and had him shipped to Helgstrand in Denmark. After getting 73 and 72% scores in one local show in Svenstrup, Denmark, Severo Jurado Lopez made only one attempt to compete the horse internationally. At the 2018 CDI Hagen he retired at the end of his Grand Prix test, but posted 69.891% in the consolation Grand Prix the next day.

Bertschinger, who owns her private yard Gestut Sonnenhof in Switzerland, purchased Sir Schiwago as her future Grand Prix horse in the autumn of 2018.