Fidus, Price Highlight of the 2019 Hanoverian Foal Auction in May 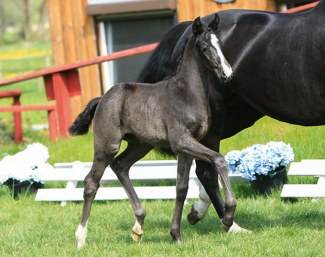 Fidus (by Furst Belissaro x Dr. Watson) became the price highlight of the 2019 Hanoverian Foal Auction auction held on 25 May 2019.

In the 70th anniversary year of the Verden Auctions a new concept celebrated its premiere. For the first time foals were offered on one event in spring.

Bred and owned by Petra  Mohrmann, Fidus sold to a breeder from Ritterhude, Germany, for 21,000 euro

Felina (by Feinrich x Rousseau) was the second most expensive foal and was acquired by a Westfalian client for 20,000 euro.

Filly Vita (by Vitalis x de Niro) will stay in Germany with a new owner for 15,500 euro.

The highest price for a jumper foal was 16,000 euro. This was paid for Carius H (by Chacfly PS x Numero Uno).

A foal at this auction cost 7,197 euro on average. Eighteen foals will leave Germany, five of them to the Netherlands and four to Great Britain.

"The lively auction activity shows us that the new concept is well received by our customers," said auction manager Jörg-Wilhelm Wegener. The mood was already positive on the evening before the auction. Home is a feeling – this was the motto of the well-attended Breeders' Evening to which the team of the Training and Sales Centre of the Hannoveraner Verband had invited.