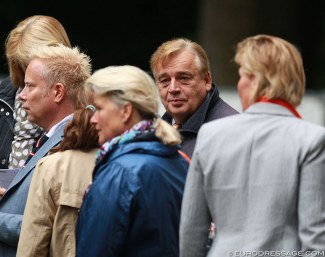 German 4* dressage judge Peter Engel has passed away unexpectedly on Tuesday evening 22 May 2019. He was 70 years old.

Engel was the owner of the equestrian centre Gutshof Glückauf  in Hünxe, Germany, which boasts a protected stately home built in 1924 by Baron von Thyssen.

The stable hosted numerous national competitions and breed shows, including the 2012 German Youth Riders Championships. He served as a judge at the German National Foal Championship.

In 2005 the Rhinelander riding society named Peter an honory member for his lifetime achievements for the sport.

Peter leaves behind his wife Eva and daughters Alexa and Nathalie.

"He was a lovable family father, a great horseman and as international judge he traveled all over the world," his family posted. "He leaves a void in our hearts. But all lovely memories will stay! Of course we will do our best to carry on his business as well as his fantastic breed!"