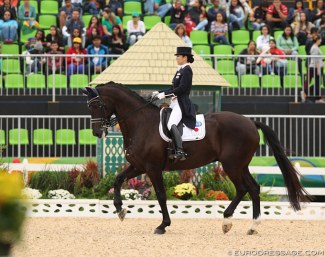 The Grand Prix horse Toots has passed away only six months into his retirement after a long career at international top sport level.

Toots was a 19-year old Dutch warmblood gelding by Jazz out of Milleke (by Havidoff).

The horse was originally owned by Dirk Fiechter when the Bartels' family and a group of sponsors acquired him in 2010 as Imke Schellekens-Bartels' 2012 London Olympic hopeful.

The pair started to compete internationally at small tour level in 2010 and made its international Grand Prix debut in April 2012 at the CDI Addington. The combination missed out on a Dutch Olympic team spot, but continued to compete in the winter of 2013.

At the 2013 CDI-W 's Hertogenbosch, Schellekens and Toots had to withdrew before the Grand Prix because of an allergic reaction which made the horse cough. This allergy, alongside other health issues, kept Toots from the show ring and in rehabilition for more than two years. Schellekens made her international come back with Toots at the CDI Roosendaal Indoor at the beginning of December 2015.

Initially it was thought that the partnership between the petite Kuroki and the 1.88m standing Toots could be difficult size-wise, but the cheerful Kuroki truly made it work on the tall black gelding and achieved some career defining moments on the horse.

Kuroki and Toots represented Japan at the 2016 Olympic Games in Rio and won team gold at the 2018 Asian Games in Jakarta. The latter Championship was Toots' final show.

Toots was sent into retirement with American Kaiko Krahnke in Colorado, U.S.A. in the autumn of 2018.

Yesterday the horse collapsed and died when he was being loaded on the trailer. Toots most likely succumed to an aortic rupture.

"When he got on a trailer to go out, he suddenly fell down and then died," said a saddened Kuroki. "I still can’t believe it. I can’t stop crying."

"Our big friendly giant Toots died last night. For ten years he was my biggest friend, as well as my mom's and everyone in the stable. He was the sweetest horse you can imagine. I had beautiful years with him and many good memories. He was an incredible schoolmaster to Akane. We will never forget him. He was truly special. We'll miss this big boy."

Also Kuroki looks back on a wonderful time with Toots.

"I have lots of memories and experience with him," said Kuroki. "He took me to the new world which are the Olympic Games in Rio, Asian Games in Jakarta, Olymipia in England and so on. He was spending a second life in the U.S with a friend of mine, having a great time there. I have learned a lot of things from him and he brought me happiness. You are always in my heart and never forget having the precious time with you, Toots."