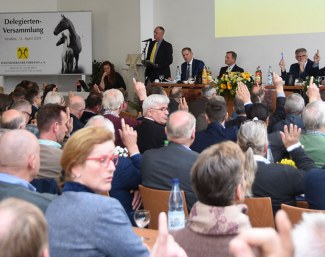 At the delegates' meeting of the Hannoveraner Verband in Verden, the planned structural reform met with great approval among those present. The ten-hour marathon meeting was a stimulating discussion, with numerous motions on the extensive agenda.

The delegates' meeting in the forum of the Niedersachsenhalle was eagerly awaited. 20 board members and 129 delegates as well as numerous members worked their way through the extraordinarily extensive agenda. A large number of motions had been submitted, most of which were voted on by secret ballot. "It is about the future of the Hannoveraner Verband," said chairman Hans-Henning von der Decken. "Today we must set the course for further development!"

Before the voting marathon took place, Breeding Director and Managing Director Dr. Werner Schade gave a picture of the situation of the Hannoveraner Verband and put the horse in the foreground. Sporting successes at the World Equestrian Games in Tryon/USA and at the World Championships for Young Dressage Horses in Ermelo/NED were the highlights of the past year. "At the Herwart von der Decken-Show and at the stallion licensing we had such a broad top in both disciplines as we have never seen before", he said. The group of breeders was correspondingly large, receiving medals, plaques and honorary certificates for their successful Hannoveraner and Rhineland horses. "Our location in Verden is very important, this is where we want to bring breeders, buyers and riders together! Breeding and sport have changed, and we need a common value profile," concluded Dr. Werner Schade.

Behind the Hannoveraner Verband lies an extremely positive business year, which ended with a net profit of around 316,500 euros. A good auction year with a brilliant stallion sales contributed to this. Two district societies have elected a new chairman in recent weeks. Christopher Kröckel will represent the Brunswick District Society on the Board, Hermann-Josef Thoenes the North Rhine-Westphalia District Society.

All items on the agenda were discussed in an open and intensive discussion. The planned structural reform, which focused on reducing the size of the entire Board, clearly assigning responsibilities and creating a Supervisory Board, met with great approval. Especially the question of the separation of breeding management and management was discussed in detail, the opinion was divided among the participants. The Board could not reach an agreement on the question of outsourcing the marketing into a separate company. "I am sure that we will find committed people for the commission, which will work out proposals for structural reform," said Hans-Henning von der Decken.

Jürgen Stuhtmann and Bernhard Ueffing were confirmed in their position on the Board. Theodor Leuchten announced his resignation from the executive board of the Hannoveraner Verband. "The task of leading the Rhineland breeders into the Hanoverian Verband was an exciting and thrilling time. I believe that we succeeded well in this. But the board's work was also associated with difficulties," he said. The other members of the executive board, the chairman Hans-Henning von der Decken, his deputy Hartmut Wilking and Jörn Wedermann, were also confirmed in their offices.

"I would like to thank everbody for the positive course of this meeting", Hans-Henning von der Decken concluded, expressing his satisfaction with the outcome of the votes on the applications. "Iam very pleased that we were able to use this delegates' meeting, which was under difficult circumstances, so constructively. The discussions were open, fair and forward-looking."