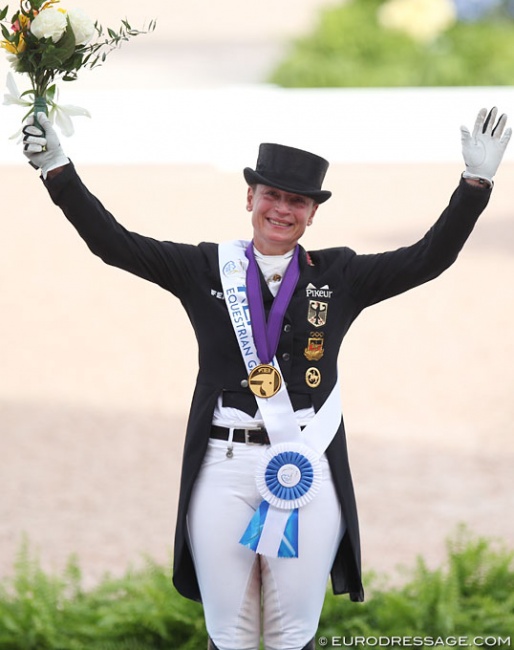 Wonder-woman Werth faces stiff opposition as she chases down a fifth title at the 2019 World Cup Finals in Gothenburg. The German legend must hold back a rising tide of top talent.

She may be the only rider to have qualified two horses for the 2019 Dressage World Cup Final 2019, but Germany’s Isabell Werth has an army of opponents hoping to snatch the crown from her head when the action gets underway at the Scandinavium Arena in Gothenburg (SWE) on 3 - 7 April 2019.

A total of 18 combinations from 12 countries are now confirmed for this 34th annual contest, with representatives from Belarus, Denmark, Dominican Republic, France, Ireland, Netherlands, Portugal, Russia, South Africa, Sweden and USA, as well as two of her own compatriots, all ready to take on the undisputed queen of their sport.

The most medalled athlete in equestrian history will need to be on her toes, but if ever there was a lady who knows a thing or two about rising to the occasion and upping her game when it’s really needed, then that is the doyenne of dressage whose massive medal haul includes six Olympic and eight World Championship golds.

It seems a lifetime ago since she first held the FEI Dressage World Cup™ trophy aloft after a brilliant performance with Fabienne in Gothenburg back in 1992. How nice it would be to do it all again in the same Swedish city 27 years later, especially since another victory would also secure a three-in-a-row hat-trick after proving unbeatable with Weihegold in both 2017 and again last year.

The only other rider to have secured three consecutive titles is The Netherlands’ Anky van Grunsven who was unbeaten with the great Bonfire between 1995 and 1997, and whose spectacular total of nine wins over a 13-year period is unlikely ever to be challenged.

With a superb series of results on the Western European League circuit Werth has qualified both Weihegold and Emilio this time around, but Denmark’s Daniel Bachmann Andersen threw a shot across the bows of all his rivals when coming out on top at the last leg of the series in ’s-Hertogenbosch (NED) 10 days ago. Werth and Emilio had to settle for third that day behind fellow-countrywoman Helen Langehanenberg who produced a personal-best from Damsey FRH. Bachmann-Andersen was last to go and swept them all aside however when laying it all on the line with the extraordinary one-eyed stallion Blue Hors Zack.

Central Europe will be represented by Russia’s Regina Isachkina (Sun of May Life) and Olga Safronova (Sandro D’Amour) from Belarus while Yvonne Losos de Muniz (Aquamarijn) will fly the flag of the Dominican Republic. The FEI Extra Starting places have gone to German-based South African Tanya Seymour (Ramoneur), America’s Adrienne Lyle (Salvino) and The Netherlands’ Emmelie Scholtens (Apache) but one of the biggest threats to Werth’s supremacy may well come from Laura Graves (Verdades) who, along with Kasey Perry-Glass (Goerklintgaards Dublet), has qualified through the North American League.

Don’t miss a piaffe or a pirouette….