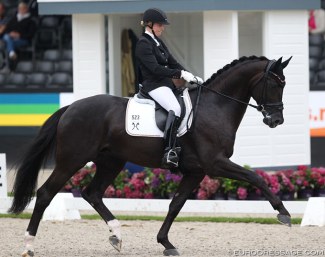 Mario von Depka, co-owner of the 2017 World Young Horse Champion Don Martillo, has announced on his Facebook page that he suspects his Hanoverian breeding stallion to suffer from shivers. Therefore, he has been taken out of his breeding program.

"Yesterday we experienced, what we presumed for a long time, that our stallion Don Martillo is suffering from shivers," Von Depka stated. "Therefore we have pulled him from our breeding program because it's suspected that shivering is hereditary, at least until the vets have declared him healthy again."

The 7-year old Don Martillo is by Don Juan de Hus x Benetton Dream and is owned by his breeder Axel Windeler in partnership with Mario von Depka. Under Ann Christin Wienkamp the black was the 2016 Bundeschampion in Warendorf, the 2017 World Young Horse Champion in Ermelo, he won the 14-day suitability test and was top scorer in the stallion sport test in 2017.

In 2018 co-owners Windeler and Von Depka fell out about the management of the stallion. Don Martillo did not appear in public after February 2018 and was rumoured to be injured. Windeler denied any health issues in a recent Eurodressage article.

Von Depka said the stallion showed the first signs of shivers at the beginning of the 2018 breeding season.

"Already at the beginning of February 2018 it stood out that the stallion painfully pulled the right hind and after the cramps subsided he would slowly put the leg down again. At the end of February 2018 the breeder of the stallion, who was till then based at Hof Oelrich, brought him home to Walle. At the beginning of the breeding season, for the first time on 6 March 2018, the breeder brought the stallion to us (at Gut Lonken) for covering. Here also I saw it for the first time, that the stallion convulsively pulled his hindleg high with cramps in his back, pelvis and tail. However we thought it was because of the transport boots he was wearing upon arrival. When the stallion returned to us to cover on 8 March 2018 he showed the same cramps but this time he also had trouble to slide off the phantom and couldn't do it without our help. We spoke to the breeder and asked him if the stallion was examined by the vet. They said no, but said that they would do physiotherapy."

Since then Don Martillo was no longer brought to Gut Lonken for covering. Yesterday on 25 March 2019 Von Depka found out that Don Martillo was examined by the vet on 21 February 2018 and a first diagnosis of Shivers was uttered and communicated to Windeler, according to Von Depka. Only through pressure by Von Depka did the co-owner finally get informed of the vet reports and treatments at the beginning of March 2019.

"Because we suspected that the stallion is not fit, we already removed him from our stallion catalog for 2019," Von Depka continued. "After hearing yesterday for the first time through a veterinary certificate that shivers had been suspected since early 2018, we are obliged to inform our breeders about this information to be transparent. In order not to expose the stallion to any potential pain or suffering from covering on the phantom, we will not offer him as a breeding stallion until further notice."

Von Depka concluded, "we regret this development very much, but for the sake of fairness towards the stallion and for openness to our breeders we don't see any other option."