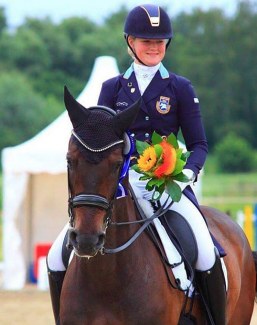 Sold through Hof Kasselmann to dressage afficionado Frank Henning, Syriana was twice competed by Christine Henning in the winter of 2017-2018.

In the spring of 2018 the dark bay mare moved to Patrik Kittel's yard to be sold. Swedish Malin Nilsson received the ride on the mare. Nilsson competed her in five national events at Inter 2 - GP level and in one international, the CDI Flyinge in September 2018, where they finished 6th in the Grand Prix with 69.087%  and 3rd in the Grand Prix kur with 71.870%.

"This beautiful, elegant GP mare is a joy to work with," said Mary. "Each day we develop our partnership a little more. Exciting times ahead."

Mary Hanna recently went Marie Kondo, reorganizing her horse stock by selling Boogie Woogie as well as her Ermelo finalist Gerion to Andreas Helgstrand. At the same time she purchased the 9-year old Ferrero (by Tuschinski x Jazz) as new iron in the fire.