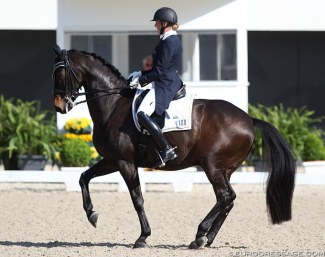 Five-time Australian Olympic dressage rider Mary Hanna has made some changes in her dressage life as she wants to focus on qualifying for what could be her last Olympic Games in 2020.

"I have been keeping very quiet, because late last year I had to make a very difficult decision. Times are changing in Dressage, and the standard is becoming so high, I felt I had to regroup, and make a new plan for my ambition to make my sixth and possibly final Olympics," Hanna explained about her decision to sell the two horses.

Hanna made her show debut on the now 13-year old KWPN bred Boogie Woogie (by Du Moulin x Florett As) in April 2014 at small tour level at the CDI Hagen. They did not compete internationally in 2015 and she moved him up to Grand Prix level in 2016 to qualify on the Australian team for the Rio Olympics, where they finished 39th in the Grand Prix with 69.643%. In January 2018 they won the Pacific League World Cup Finals, but Mary did not compete at the Finals in Paris, France. She decided to ride Calanta in Paris, but the mare was not fit to compete shortly after arriving in Germany from Australia and having competed at the 2018 CDI-W 's Hertogenbosch in March. Boogie Woogie did his last CDI in October 2018 in Exloo, The Netherlands.

Calanta is back in full work now and Mary will focus on the 12-year old Dutch warmblood mare Calanta (by Johnson x Goodtimes) for her 2020 Tokyo Olympic qualification campaign. She has planned on competing her in the spring outdoor shows in Europe while being coached by Patrik Kittel.

Hanna has also bought the 9-year old Ferrero (by Tuschinski x Jazz) as a second iron in the fire. He was bred and trained by Esmee Janssens in The Netherlands.

"He is a diamond in the rough, with no fancy scores or profile, but his owner did a great job with him, having had him since a foal," said Mary.