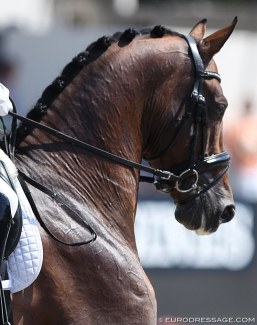 Little noise has been given to an important rule change that the FEI put in place as of 1 January 2019 until a watchful eye at Pferderevue in Austria spotted the alteration in the FEI rule book!  As of 2019 riders competing up to 2* level will have the choice to compete their horses in a snaffle or double bridle!

Very few European shows host Grand Prix classes at a 1 and 2* level so for most Grand Prix riders the double bridle will continue to be mandatory.

However, junior and young riders will now have the option between a snaffle and a double as well as riders competing in small tour classes at 1 and 2* level. In the U.SA., South American and Australia 1 and 2* CDI's at Grand Prix level are hosted, so riders have to be watchful to see at what star-level they have entered.

A noseband is still mandatory when a horse/pony is ridden in a snaffle: