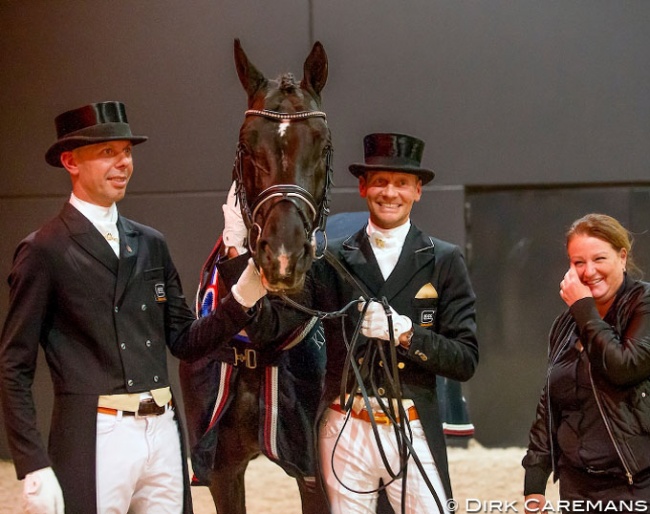 The "Black Magic" show featuring Totilas and his get at the 2019 KWPN Stallion Licensing in Den Bosch on Friday 1 February 2019 was a massive success based on the enthusiastic reactions and standing ovation from the crowd.

The 19-year old Dutch warmblood stallion Totilas (by Gribaldi x Glendale) was led into the arena by his last rider Matthias Rath, while a presentation took place of Totilas' most famous KWPN licensed sons and grandsons.

The finale included a meet and great of the three best known Totilas' sons with their sire, followed by a lap of honour with those Totilas' sons Governor (Adelinde Cornelissen), Toto Jr (Hans Peter Minderhoud) and Total U.S. (Edward Gal).

The show also showed Kayne (by Totilas x Rousseau), Koning (by Totilas x Brettin Woods) and King Karim (by Toto Jr. x Painted Black) in hand. The German bred Trafalgar (ridden by Riccardo Sanavio) was withdrawn on Thursday from the show, because he was not fit.