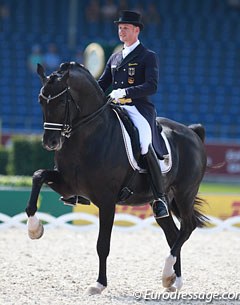 Last week the news was published that former World Champion Totilas would make his first public appearance again at a stallion show in Saint Lo, France, after his crashed swang song at the 2015 European Championships in Aachen. Co-owner Paul Schockemohle rebuked that report and has stated that Totilas will never be presented in public again.

British equestrian magazine Horse and Hound apparently wrongly reported that Totilas (by Gribaldi x Glendale) would make an appearance in the Saint Lo stallion show on Sunday 19 February 2017, most likely in hand, as Paul Schockemohle has planned on presenting a selection of his breeding stallions at this particular show.

Paradoxically Horse and Hound got a positive confirmation that Totilas would make a public come back after an interview with Saint Lo show director Brice Elvezi. Also Schockemohle's right hand Christoph Hinkel confirmed Totilas' appearance, but added he would be shown in hand.

A day later, however, the man himself, Paul Schockemohle, denied those reports. "This was not planned," Paul told SID. "People are now gossiping and devaluing this horse cent by cent. All nonsense. Germany is a community of envy."

Related Links
The End of an Era: Totilas Retired from Sport
Totilas Buzz at the 2014 CDI Kapellen
Totilas Sold to Paul Schockemohle