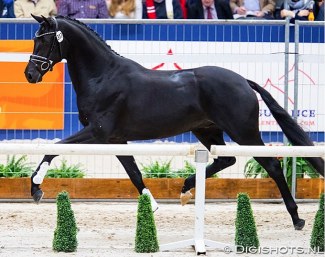 The 2019 KWPN Stallion Licensing is in full swing in 's Hertogenbosch, The Netherlands. The dressage licensing kicked off on Friday 1 February 2019, with the first groups of colts appearing for the second phase.

Today thirty-one colts were accepted for the third phase. Tomorrow morning the last remaining groups of dressage colts will be presented for assessment in the second phase.

The third phase - the actual licensing with a permission to move on to the mandatory stallion performance testing - will be on Friday afternoon for the Friday colts and on Saturday afternoon 2 February 2019 for the Saturday colts.

The champion's/premium ring is in the afternoon right before the auction of the stallions.

Judges Bert Rutten, Arie Hamoen (replacing an ill Marian Dorresteijn) and Reijer van Woudenberg make up the licensing committee and they accepted to the third phase, so far:

Results of the second phase (so far)