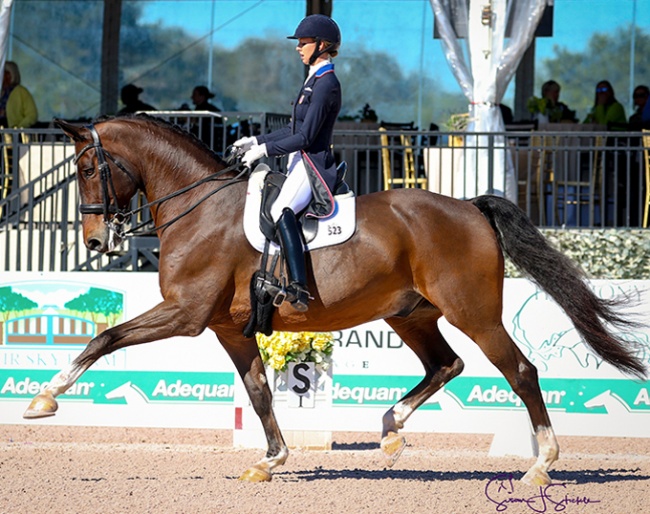 The 2019 Global Dressage Festival (AGDF) in Wellington, Florida, started with its first day of competition at the Palm Beach International Equestrian Center (PBIEC) on Thursday with an easy 80% scoring win for Laura Graves (USA) and Verdades in the Grand Prix CDI-W.

The first week at AGDF, the Lloyd Landkamer Memorial, features CDI-W competition from January 10-12, but the event was unable to entice the riders for an early season start. The FEI level classes are tiny with not a single class featuring more than 8 riders.

For the Grand Prix riders with World Cup Finals' aspiration, an early start is advantageous as the new FEI rules says that they have to compete in at least three World Cup qualifiers, instead of two, for Finals qualification. This explains with the big guys such as Laura Graves and Shelly Francis were out there yesterday for the CDI-W Grand Prix.

Laura Graves (USA) won the class with a score of 80.065%. Graves rode her own mount, Verdades, a 17-year-old Dutch Warmblood gelding by Florett As.

Graves said that her ride was “a good way to put the first show into perspective after we haven’t been out since the [World Equestrian Games] was called off before the freestyle, so it’s been quite a bit since we’ve been in the arena. It always feels like, ‘Okay, we still know what we’re doing.’” She remarked, “He obviously still has a ton of gas in the tank. I’m really, really excited with how today went.”

Her favorite part of her ride today was that Verdades “saved [her] today in the zig zag.” She continued, “I poked him on five and he said, ‘Mom, you gotta wait for 6.’ And so I was just really lucky that he saved me there and it’s nice to know that you can count on a horse like that.”

“He gets even more electric here than he does at any other huge venue in the world,” said the 2018 FEI World Equestrian Games Tryon (WEG) silver medalist. “We want to see more relaxation in his free walk because we lose some points there when he has such a good walk in the school. And again, just tidying things up so my transitions are on time so I can really feel safe to push.

Graves and Verdades will be debuting their new freestyle created for WEG on Friday evening.

Michael Klimke (GER) started off the season by winning the Prix St. Georges CDI3 with a score of 70.265%. Klimke rode Diabolo, a nine-year-old Hanoverian gelding by Desparados owned by Harmony Sporthorses.

Klimke also won the Grand Prix CDI3*, presented by MTICA Farm with a score of 68.435%. Klimke rode his own mount, Royal Dancer 33, a 13-year-old Hanoverian gelding by Royal Blend.