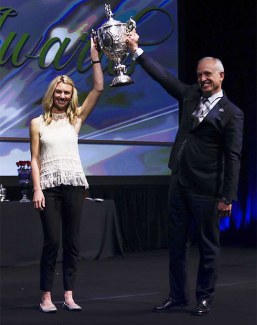 Laura Graves (Geneva, Fla.) has been awarded the Robert P. Strub Trophy as the 2018 USEF Equestrian of the Year at the Pegasus Awards  during the US Equestrian Annual Meeting.

2018 was a record-breaking year for Graves and her and Curt Maes’s 16-year-old Dutch Warmblood gelding Verdades (Florett As x Liwilarda/Goya). Not only did the combination contribute to U.S. Dressage Team’s silver medal at the World Equestrian Games™ (WEG) Tryon 2018 but also made history in the Grand Prix Special as the first American combination to earn an individual silver medal at a world championship. Their success at the WEG boosted Graves and Verdades to the number-one spot on the Dressage World Ranking List in October, marking the first time a U.S. dressage combination has been ranked as world number one.

"I come from a family of athletes, and it wasn’t until I settled into equestrian sport that I really became comfortable with myself. If it weren’t for the family I found in equestrian sport, I would be just an uncoordinated awkward girl without very many friends, so thank you all for being my friends," said Graves. "There are so many people who make this world turn for me, many who are here tonight: I have my amazing family, Betsy Juliano, Debbie McDonald, my amazing teammates, my vets and farriers. But it’s honestly a bigger community than my little world that turns. It’s all of you who are members, all of you who support equestrian sport, whether it be dressage, jumping, or whatever your sport is, our connection to the horse unites us all.”

Eight equestrians were recognized for their competitive achievements in 2018 and honored with the following trophies:

The following prestigious awards are bestowed annually to equestrians for their service to the sport. This year’s recipients are as follows: