Bordeaux Returns to Holland, Leased by Kuroki for One Year 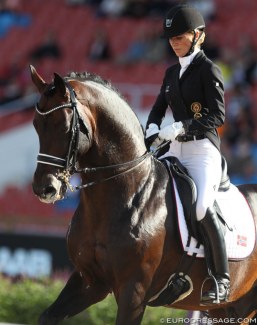 The KWPN licensed breeding stallion Bordeaux has returned to The Netherlands to stand at stud and be ridden and competed by Japanese Olympic team rider Akane Kuroki.

The 12-year old Dutch warmblood bred Bordeaux (by United x Gribaldi) is bred by Lisman stables and is owned by Paul Schockemohle in partnership with Joop van Uytert.

Bordeaux was the 2009 KWPN licensing champion and moved to Schockemöhle's yard right after the licensing to stand in Germany.

Under Eva Möller the bay competed at the 2012 World Young Horse Championships and finished fourth in the 6-year old Finals. Möller trained and competed him up to Developing Grand Prix level.

In 2017 Norwegian Isabel Freese-Bache took over the ride as head rider at Schockemöhle's stallion station. They represented Norway at the 2017 European Championships in Gothenburg, where they finished 44th in the Grand Prix with 66.029%. In 2018 Freese rode Bordeaux at one more CDI in Hamburg in May, but then the rider got pregnant and reduced her show schedule.

Kuroki announced that she "acquired" Bordeaux as her new Grand Prix ride after the untimely passing of the Lusitano GP mare Batute, which she only owned for one month before a colic fatally struck the mare.

Co-owner Joop van Uytert confirmed that Bordeaux has returned to The Netherlands. The horse is now based at Imke Schellekens-Bartels' yard in Hooge Mierde, where Kuroki trains. The Japanese has leased the stallion for one year, with an option to extend it a second year based on the achieved scores leading up to the 2020 Olympic Games.