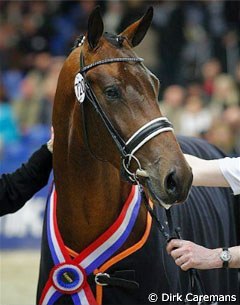 Bordeaux has been proclaimed champion of the 2009 KWPN Stallion Licensing in 's Hertogenbosch, The Netherlands, on February 6, 2009.

The dark bay colt was considered the most complete stallion of this year's collection and excelled, according to the stallion selection committee, in his self carriage and suppleness. Bred by Nelly Lisman, Bordeaux is by United out of star mare Venna (by Gribaldi x Donnerhall). He is owned by Joop van Uytert and Paul Schockemöhle.

The dark bay Beau (by Lingh x Ferro) finished in reserve champion's position. Bred by Jan Lamers and the late A. Van de Goor, Beau moved with much expression and cadence.

The long legged Balou (by Sandreo x Jazz) landed a third place in the champion's ring. Brentano, by United out of a full sister to Adelinde Cornelissen's Parzival (by Jazz) slotted in fourthy. Boston (by Johnson x Partout) was fifth and Boris (by Uphill x Darlington) ranked sixth.

Twenty-six dressage stallions were licensed in total at the 2009 Dutch warmblood licensing and six made it into the champion's ring. These twenty-six are invited for the spring Stallion Performance Testing, which they will need to pass in order to be fully approved.

The KWPN stallion licensing showed a broad range of quality horses. As Chairman of the Selection Committee Arie Hamoen said: “We’re very enthusiastic about the breadth of quality in particular. It is always good to have an absolute top-horse, but for progress it is much more important that we see an increase in quality overall. We have selected six stallions per breeding direction for the Championship, but we could have easily chosen ten, without loosing any quality. The qualified Stallions are all very complete horses. Our focus is selecting horses for a combination of functional conformation and bloodlines, and performance in the oval pen that supports these two criteria. All the horses showed well, and with respect to genetics, I think that this year’s stallions can pass the critics’ test.”

The twenty-six stallions approved for the Stallion testing are:

A nameless colt by Indoctro out of keur mare Nisolde (by Nimmerdor x Silbersee) was proclaimed champion of the show jumping colts. Breeder Mr Abbring from Onnen was moved to tears during the proclamation and owner Wiepke Van de Lageweg rejoiced. The latter had three stallions in the champion's ring.