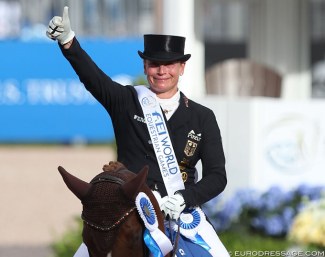 Olympic silver individual and gold team medallist duo, Isabell Werth and Weihegold Old, have topped the FEI Dressage World Rankings once again (2742 points), following their win in the Grand Prix and the Grand Prix Freestyle to Music at the 2018 CDI Stockholm.

The famous combination, who were number one for almost two years, from November 2016, only sat in second place for a couple of months behind Laura Graves and Verdades (USA), who won individual silver at the 2018 World Equestrian Games, where Werth chose to ride Bella Rose to gold.

The American duo now drop back to second place again with 2714 points.

Dressage Queen Isabell Werth can be found three times in the top four of the ranking list, as she holds the third place with Bella Rose (2690 points) and the fourth place with Emilio (2658 points).

A number of other combinations moved up in the rankings, thanks to the CDI Stockholm and the World Cup qualifier in Madrid (ESP) on 23-25 November 2018.

With the FEI Dressage World Cup™ season continuing over the next few months there will certainly be more impressive changes in the ranking list.

The FEI Dressage World Ranking list can be found here.